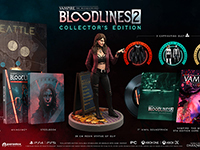 The collector’s edition for Vampire: The Masquerade — Bloodlines 2 is now revealed with a look at another classic character coming back in for Bloodlines 2

If you are like me, then you have been waiting to find out if there is going to be a collector's edition for Vampire: The Masquerade — Bloodlines 2 when it launches for us. If you are clever, then you know that is what we are all here for given the headline and everything above. That is nice and all, but none of that goes into the details for this collector's edition and just what it looks like Hardsuit Labs is going to have in it. That is where the rest of this comes in as we look into more of the goodies that Bloodlines 2 will hold for us on the PS4, PS5, Xbox One, Xbox Series X, and PC when it launches this year. Hopefully sometime earlier than later.

Moving along. Here, if you are willing to shell out the extra dough for Bloodlines 2, it looks like we will get a nice little statue for one of the main characters we will play in the game, a map of Seattle in the WoD, a 7” Vinyl soundtrack, Steelbook, a PDF of the 5th edition tabletop game, and the various DLCs that have been announced. I leave out the copy of Bloodlines 2 in this list due to the fact that you can pre-order all of this with or without the game. The cost difference being that of the game, but all so fans that have already pre-ordered have a chance to pick up this limited bundle of goodies for it too. There will only be 3000 of them out there, so you may need to make up your mind quickly on if you are going in on it. Koch Media and Paradox Interactive today announced a limited Collector’s Edition for the upcoming Action RPG Vampire: The Masquerade — Bloodlines 2. This unique edition is now available via the Paradox Store for pre-order at a suggested retail price of $169.99 USD.

Strictly limited to 3000 pieces, the Collector’s Edition contains a 7” vinyl featuring some of the iconic music players can expect when roaming the streets of Seattle at night. Additionally, a 28 cm tall detailed figurine of Elif – one of the main story characters players will encounter in their personal digital afterlife – a precise map of the game world and streets of Seattle, and a beautiful Steelbook make for an amazing package for true fans. To allow fans an even deeper dive into the world behind Bloodlines 2 the Collector’s Edition will also feature the 5th edition of the Vampire: The Masquerade rule book as a digital bonus.

The Collector’s Edition will be available with and without the main game and DLC content to allow fans who pre-ordered any digital version access to the physical collectibles without needing to buy the game twice. The non-game collector’s edition comes at a suggested retail price of $109.99 USD. Paradox Interactive also revealed that Damsel, the fan favorite Brujah from the original Bloodlines, will return in Bloodlines 2. Damsel’s original voice actress, Courtenay Taylor, is reprising her role as the iconic character.

In addition to this announcement for Vampire: The Masquerade — Bloodlines 2, we also have a look at another character in the game we will get to interact with. If you played through Bloodlines before, which I am guessing you have if you are here, then you will recognize Damsel is going to be part of the story here. I have a feeling she is going to be one of the quest giving NPCs in the game to run you down a specific path in Bloodlines 2, but that could be different than it would seem. We will not fully know until we finally get the full details for the game, but it is worth a little watch so you can have the memory kick back in.

Will you be throwing down for this new bundle for Bloodlines 2 or will you be sticking with the base game? Do you think that it will be a nice and easy transition for the current-gen systems to the next-gen systems or will it all be weird given the release cycle of it all? Do you remember Damsel here or will you need to go back and replay the first game again? Let us all know down in the comments and then feel free to discuss it all as you wish. If there is more for Vampire: The Masquerade — Bloodlines 2, you know we will have it all here. Just be sure to keep coming back for all of that and much more.