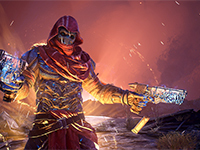 The first broadcast for Outriders is out there for us all to consume now as People Can Fly take us further into their new and upcoming shooter for the PS4, Xbox One, PS5, Xbox Series X, and PC. There is still no date for when we will actually get to fire off some rounds or special attacks in the game, but that does not stop us from having a nice and long bit of footage to look at. Not only from the game itself but also a little bit of a dive into one of the core classes that has been announced for Outriders here. None of which looks like it will spoil a single thing for those that only want to go in for the story and lore of it all.

I mention that, as it looks like Outriders is going to have a dynamic difficulty system based on things or you can always go in for the story and lore of the game over that. This is what they are calling their World Tier system that will rank from 1 (Story Mode) to level 15. As you progress in Outriders you will be able to unlock these modes by gaining "World XP" and then changing to the new difficulty on the fly. This will do the normal things of making the enemies tougher but also allowing us to find and equip better gear along the way. The interesting part is that when you die in the game, you will lose some of that World XP so you are not progressing to a difficulty you are not able to handle. It is not clear if you can go down in level once you have made it to the next, but as you can see in the following video the player is at level 4, dies, and then loses a bit of progression to level 5.

Obviously, that will make the world a bit more dynamic in Outriders and with that we need to have classes of characters that can handle that. This is where the Trickster comes in as a master of time and space. They are also the Assassin class based on the different parts of the skill tree you go down for the character levels here. It does look like they will always have a melee attack that will slow down enemies when hit and a bubble that will cause our own little bullet-time area. Also interesting is the fact that they will have abilities to teleport behind enemies and a sort-of point reset to get out of trouble in Outriders. Something that will need based on how health and armor are gained in the world. More or less by killing enemies out there. Have a look to see the finer details we glossed over, though.

Outriders — Built For The Core

Watch the inaugural Outriders Broadcast, titled “Built for the Core” and see brand new, in-depth gameplay playthrough from an unseen area of the game, deep-dives into gameplay features, QA with the team and a spotlight on one of Outriders four character classes – The Trickster.

Outriders is a 1-3 player co-op RPG shooter set in an original, dark and desperate sci-fi universe. As mankind bleeds out in the trenches of Enoch, you’ll create your own Outrider and embark on a journey across the hostile planet.

Are you ready for Outriders to hit us here or do you need a different class shown off to get you all the way in? Do you think we can lose World Tiers if we die too often or will we always be able to select the highest one we have unlocked no matter how poor we are doing in the game? Do you even care about that and will only be going in for all of the story and lore to have out there? Let us all know down in the comments and then feel free to discuss it all. When there is more for Outriders, and we know there will be a lot more, we will add it to the site for you. Just keep checking back in for all of that and much more so you are fully in the loop.