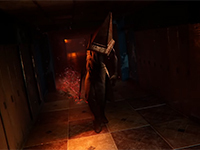 Those looking for a bit more of Silent Hill even though a full game has yet to be announced again? Well, it looks like Dead By Daylight is going to give us all a bit of it to experience here in June as it is the next chapter coming to the game from Behaviour here on the PC, Xbox One, and PS4. A nice bit of DLC to have for Dead By Daylight even if it is only one location, survivor, and killer to experience in a game not truly set in the otherworldly location. It is something, so we cannot truly complain all too much. At least not for this game, as we still can for the other one that is holding off on a new Silent Hill title.

All of that said, it looks like The Executioner (Pyramid Head) will be in Dead By Daylight as a new killer with Cheryl Mason back in the role of survivor in this one. All of which makes sense for the roles as we head back to Midwich Elementary School in terms of the location. All most of the greats we should be looking for in Dead By Daylight, even if there are a few others that would have worked just as well. I will take what I can here though. That whole beggar and choosers thing here. Maybe this will light a fire for someone to bring us a whole other title in the mix.

Silent Hill is a new Chapter for Dead By Daylight. It includes a new Killer, The Executioner, and a new Survivor, Cheryl Mason.

The Silent Hill Chapter also introduces a new map, Midwich Elementary School: the childhood trauma that once took place in its halls has since manifested itself into a twisted, nightmarish design. The new Killer is The Executioner: take control of Pyramid Head and wield his great knife to unleash his twisted brand of punishment on all who cross him. The new Survivor is Cheryl Mason, a courageous, outspoken woman who survived the hellish Otherworld of Silent Hill, and exacted revenge on the Order that killed her father. With experience beyond her years, she's prepared to once again stand against any evil that confronts her.

Were you ever expecting to see Dead By Daylight get a bit of Silent Hill in it or was this expected? Do you think this could lead to a whole other title in the works or just a fun pairing for us to enjoy? What other characters do you want to see join the growing list here and will they be able to be licensed out? Let us all know down in the comments and then feel free to discuss it all. If there is more to see for Dead By Daylight, we will share it all here. Be sure to keep checking in for all of that and much, much more.