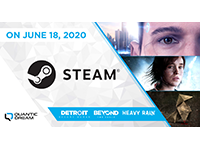 More PC gamers will get a chance at Detroit: Become Human, Beyond: Two Souls, & Heavy Rain, as they head to Steam in June

For some reason there are still a lot of gamers that skipped Detroit: Become Human, Beyond: Two Souls, and Heavy Rain when Quantic Dream brought them to the Epic Game store before. These all used to be PS3 and PS4 exclusives and when the option to bring it over for the PC master race, I would think that many would have jumped on it. I am guessing that so many are buying into all of the conspiracy stuff still even back when Detroit: Become Human made the jump. Now on June 18th you will have even fewer excuses to have for not playing these games. That will be the date that they are heading to Steam for those still only getting their games there.

There is nothing new coming to the games over there before you start to freak out. You will just have the options to experience how the branching narrative gameplay from the devs evolved from Heavy Rain to Beyond to Detroit over all of this time. The developer sure has grown the tech over the years and this is all one great bundle to look at. More so, as you can have a bit of a taste for each right now with the demo versions of each of these titles available. Fully worth a look and the time as they were all some groundbreaking titles when they first launched. Now with all of the abilities of the PC you may have out there.

Detroit: Become Human, the latest and most ambitious video game production from Quantic Dream, is finally coming to PC! Featuring world-renowned actors like Jesse Williams (Grey’s Anatomy), Clancy Brown (Carnivale), Lance Henriksen (Aliens), Bryan Dechart (True Blood) and Valorie Curry (Twilight), Detroit: Become Human puts the destiny of both mankind and androids in your hands, taking you to a near and not-so-impossible future where machines have become more intelligent than humans. Every choice you make affects the outcome of the game, with one of the most intricately branching narratives ever created.

About Beyond: Two Souls

A unique psychological action thriller delivered by A-list Hollywood performances by Ellen Page and Willem Dafoe, Beyond: Two Souls takes you on a thrilling journey across the globe as you play out the remarkable life of Jodie Holmes. Born with a connection to a mysterious entity with incredible powers, Jodie is different. Your actions will determine Jodie's fate as she faces extraordinary challenges, danger, and heartwrenching loss on a journey to discover the truth of who she is. Create an action-packed story through your choices and actions as you live her life – a girl born with a link to a supernatural entity called Aiden. By playing as both Jodie and Aiden, you will face spectacular physical and psychological challenges to understand what truly lies… beyond.

Experience a gripping psychological thriller filled with innumerable twists and turns. Spanning four days of mystery and suspense, the hunt is on for a murderer known only as of the Origami Killer - named after his macabre calling card of leaving behind folded paper shapes at crime scenes. Four characters, each following their own leads and with their own motives, must take part in a desperate attempt to prevent the killer from claiming a new victim. You need to think fast and act even faster, as every choice and move you make can result in dramatic, game-changing consequences – and even determine who lives… and who dies. How this story ends is entirely up to you.

Will you be picking up Detroit: Become Human, Beyond: Two Souls, or Heavy Rain this June or have you been loving them for a while now? Do you think all of this will bring us one more title from the team with even more advancements? Would you rather see any of these further expanded on in a sequel than a whole new IP to experience? Let us all know down in the comments and then feel free to discuss it all. I am not sure if we will have more for any of these titles, but if we do, we will share it all here. Just be sure to keep checking back in for all of that and much more.