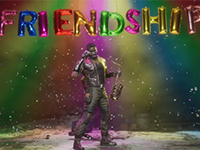 We had news that Mortal Kombat 11 was going to get an update to add in a bunch of things that have been missing over the last few years. Most of which have been thing that have been left on the cutting room floor by NetherRealm Studios to keep the game a little more gritty instead of fun and silly. Sure, there is room in the Mortal Kombat for some of the funnier stuff but the recent titles have been focusing on the other stuff. Now on May 26th we are going to see many of those stages, stage fatalities, and Friendships back on the PS4, Xbox One, Switch, and PC.

Now that the recap is over there, we do have a look at the new Friendship finishers for Mortal Kombat 11 and all of the characters out there. At least that is the assumption as we do get to see many of the core characters in the game with a few from the Kombat Packs we have had and are about to get here. Something interesting to see given that this is still a huge update for Mortal Kombat 11 we are getting for free here. I will not complain about it at all, but this all seems like something they would have normally charged for and not something basic as the character tweaks that have been going on since launch.

Grab your best friend and favorite teddy bear — it’s time to enjoy the new Friendships coming to the entire roster of Mortal Kombat 11!

All Mortal Kombat 11 players will have access to a free content update featuring new Stages, Stage Fatalities, and Friendships!

Are you overjoyed to see that the Friendships are coming back to Mortal Kombat here or are you one of those gamers that wants it to always be gritty? Do you suspect that we will see more updates like this in the future for the game or will this be the last one outside of the character packs? Do you think that we will see Animalities at some point and would you really want to? Let us all know down in the comments and then feel free to discuss it all. When we have more to share for Mortal Kombat 11, we will add it all here. Just be sure to keep checking in here.