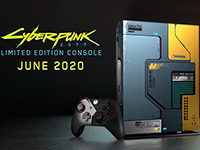 It really feels like Microsoft is leaning into Cyberpunk 2077 pretty hard since we got the huge announcements last year at E3 and then then exclusive Xbox One X that the team has been working on. It still feels a bit weird to be pushing this system out there given the newer systems coming only a few months after CD Projekt RED drops their game on the world, but they are going to do what they want right now. That includes keeping the Cyberpunk 2077 themed Xbox One X flowing to those looking to get the console to enjoy the game on before upgrading it over to the Xbox Series X later in the year. There has to be a market for it or they would not be pushing forward with it…

Nonetheless, here we are with a closer look at this system designed around the characters and world of Cyberpunk 2077 that should go out for pre-order in June. We have seen some of the visuals for the design, but now we have a long trailer showing off the reasons behind some of them and how the attention to detail is supposed to bring us closer into the world of Cyberpunk here. It also kind of highlights some of the weird rules that Microsoft has for their consoles given that a yellow label and powder blue HDMI cable are considered overly unique for this system. Maybe I am missing something here, but I am also not the biggest into case mods, which is pretty much all this is.

The story of how Xbox and CD Projekt RED’s designers unified to create the Cyberpunk 2077 Limited Edition Xbox One X and Johnny Silverhand inspired-controller.

Xbox Design Directors Carl Ledbetter and Monique Chatterjee narrate their collaboration with CDPR’s Pawel Mielniczuk and Przemyslaw Juszczyk to bring the Cyberpunk 2077 Xbox One X and Johnny Silverhand inspired controller to life. Learn the story behind this iconic Limited-Edition hardware bundle and take a deeper dive into the world of Night City.

Did this make you want the limited Cyberpunk 2077 Xbox One X more or less here? Is it weird to think that the company has rules when it comes to packaging and shipping their systems based on colors of things or does it make sense for their personal branding? Is it still weird that they are pumping out a current-gen system for the game when they have a next-gen system coming so close after? Let us all know down in the comments what you are thinking and then feel free to discuss it all. Hopefully there will be more for the actual game of Cyberpunk 2077 soon. When there is, we will share it here for you. Until then, do keep checking out everything else we are able to bring you on the site.