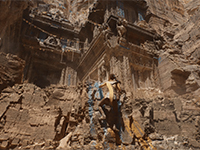 Many new gamers out there may only know Epic Games for some of their video games out there and not the fact that their biggest bread and butter is the engine that many video games out there run on based on their early title Unreal. Obviously, any of those seasoned gamers out there would know this already and some of the power this engine has offered over the years for those who do not have the time or resources to develop their own engine. Now, as part of the first of the announcements for the Summer Game Fest, we have the official announcement that the Unreal Engine 5 is coming. Not only that, but a nice little tech demo showing how well the engine could run on the PS5 in real-time. It should be assumed that it will be the same on the PC and Xbox Series X too, but the video we have is that console specifically.

There are a whole lot of technical details mixed into this video for the Unreal Engine 5, so be ready for that, but it does give us a solid look at how we see some film-quality assets in our games in the future. The proof is in the pudding more here than anything, but we do get to see how the tools will allow for insanely high polygon models, with hundreds of them in the scenes on top of the environment. They also show off how well the lighting will function in the Unreal Engine and how it can be insanely dynamic and almost photo-realistic. Try not to focus on the character they are using to show this all off and more the world. Obviously, all of this is dependent on the artists involved and the style of the game we are going to get. Have a look and get excited about the future when this engine is available for all to use in 2021.

Unreal Engine 5 empowers artists to achieve unprecedented levels of detail and interactivity and brings these capabilities within practical reach of teams of all sizes through highly productive tools and content libraries.

Join Technical Director of Graphics Brian Karis and Special Projects Art Director Jerome Platteaux (filmed in March 2020) for an in-depth look at "Lumen in the Land of Nanite" - a real-time demonstration running live on PlayStation 5 showcasing two new core technologies that will debut in UE5: Nanite virtualized micropolygon geometry, which frees artists to create as much geometric detail as the eye can see, and Lumen, a fully dynamic global illumination solution that immediately reacts to scene and light changes.

Does this new Unreal Engine give you a lot of hope for the future of gaming or will it still be how the tools are used by the developers anyway? Who do you think will use the engine to its full capacity first or will it be years before we get anything like that? Do you suspect that this will look the same between consoles and PC or will this only be the way that the PS5 is going to handle it all? Let us all know down in the comments and then feel free to discuss it all. We will see much more for the Unreal Engine 5, obviously, and we will show you all of that here. Most likely in forms of other video games, but it will be something to keep an eye on.