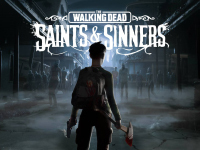 In the midst of a crazy pandemic going on, there is no better time to escape into another virtual world where a different pandemic happened and that would be the world of The Walking Dead. Now we are heading into a different part of the world with Saints & Sinners from Skydance Interactive. This time on the PSVR even though it has released on the PC for the Oculus and Rift already. That is neither here nor there right now, though. Here we go with our review for The Walking Dead: Saints & Sinners and how well it has made the leap over to the new platform.

It is time to take a trip down to New Orleans during the end of the world. If you know The Walking Dead at all, then you know what is about to go on here. This time you are just venturing out in a new land that is only linked in-universe and not to the shows or comics outside of that. All of which means that we should also be seeing many difficult choices that we have to make and see how humans are the true villains of the story and not the zombies. Even though there is quite a bit of zombie slaying going on here too. It would not be the same if you did not get to do all of that. To starts off, please remember that this is on the PSVR, the control scheme for The Walking Dead: Saints & Sinners does not seem to flow all that well to make things easy to survive. I get that in VR titles we want to go as realistic as possible to give a better experience, but there were a few things that should have been left out. The big one being the reloading of firearms. Something that if I had full freedom of movement on one controller for it would not have been an issue, but given that you can only move forward and backward with one controller and then turn with the other, that makes it hard to back up to reload when you have undead coming at you. Sure, you should not be going in guns blazing in The Walking Dead universe, but when it is needed, it is needed. With these controls leading to so many deaths and being swarmed because they just did not flow very well.

Moving a bit along the same lines with the controls and movement in Saints & Sinners, I was not a huge fan of the crafting that was required in the game. The mechanics for it are just about the norm we would expect in many other games out there, so it was not a broken system, it just seemed to not be needed with the plethora of other things you had to keep track of as well. Not only do you have to be aware of your surroundings but also health, stamina, weapon degradation, ammo, mission/tasks, and time of day, so when crafting is added in it just seemed to bog things down. I get that in the world of The Walking Dead scavenging is a thing, but for a video game to be completely enjoyable, there can be too much. This was it as it not only added in the searching for items but also more item management than was actually fun in the game.

All of which above leads to my last huge issue with The Walking Dead: Saints & Sinners. The story and missions always seemed to be hard to follow and move along with. Even with a handy little notebook attached to your chest, it was easy to get lost in things as there was so much thrown at you at once. Hells, I felt lost with the first real mission as so much was tossed my way with indicators that made things feel like they were important when they were just reminders. I even left the starting location multiple times as things were presented for the story that would not come up for later but felt pressing now, or other missions spawned in that felt like main quests when they were just side quests. Having too much to do in a video game can be good, but it detracted so much here in The Walking Dead: Saints & Sinners. While I had issues with a lot of the movement controls in The Walking Dead: Saints & Sinners, I do have to heap some great praise on how Skydance Interactive handled the melee combat. In the instances where I had enough shives or knives, or even the great baseball bat wrapped in barbwire, I could handle wave after wave of the undead if I needed to. Granted, this is the silent way to play and many went down with one headshot as they do in The Walking Dead, but it just felt very smooth. Like you could feel the weapon go in and then the struggle in some instances to get it back out. Unlike other games where it just goes in and out like stabbing a watermelon. Here they made it flow well and still give that sense of urgency as you needed that knife out of the skull to kill the next walker coming up on you. I totally enjoyed all of that.

They also did an amazing job with recreating the feel of New Orleans as it would be in the world of The Walking Dead. At least to me and also with the fact that they went with the comic style of art as opposed to the realistic they could have. From the hanging vines and tree branches of the swamp-like areas to the way the cemeteries and mausoleums look and felt, it pulled me deeper in. There was even one part near the beginning of the game where I was leery of going over to a location as it looked like a zombie band was huddled together, something out of place in The Walking Dead, only to creep closer and see it was one of the monument-like structure to celebrate the dead and fitting for the culture of the area. Nothing sinister at all and just added in to further immerse us into the virtual world they had built.

Lastly, even though The Walking Dead: Saints & Sinners has never been billed this way, it did feel like the dialog options in the game and story had some bigger meaning and effect to the world. I would need to replay and retrace all of my choices again to see if that is truly the case, but the fact that it felt like that from the beginning stood out to me. More so than other video games out there that use that as the biggest selling point for the game. This could have just been how the world was built around everything and the attention to detail and character depth The Walking Dead is known for, but it was a shining star in all of this for me. Time to go back and give it a try to see if that is truly the case. I do have to say that I am not certain that The Walking Dead: Saints & Sinners should be played on the PSVR outside of the fact that it is an easier platform for many gamers to get into here. The controls for the game felt buggy and limited and I partially think that was due to what the PS Move controllers offer up as options. It was so very frustrating to try to do things I know I could do without training in the real world but had issues with because I was using buttons to move around instead. That said, the game does a great job of adding to The Walking Dead universe in my eyes and had some fun experiences to have in the mix of it all. You can try to ignore a lot of the things that bogged my experience down a bit and maybe that could make it a better experience for you too. As long as you can get by with only using melee weapons and ammo you find along the way and not crafting together.

The Walking Dead: Saints & Sinners was developed by Skydance Interactive and published by Skybound for the PSVR on May 5th, 2020. The PC version launched on January 23rd 2020. A PSVR copy of the game was provided by the publisher for reviewing purposes.