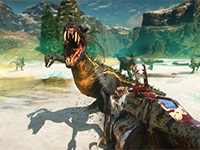 We have had a huge influx of zombies, Nazis, Nazi zombies, and killer robots in our video games as of late and now we have the announcement that we are going back to some other classic creatures to kill with Second Extinction. Those creatures being mutant dinosaurs that have taken over the planet in Systemic Reaction's upcoming title under the new Avalanche Studio Group. I am not certain that Second Extinction is the same title that was teased back when the merger was announced for all of the studios, but that does not really matter. We are getting to go out and hunt down dinosaurs again in a video game on our PC and the upcoming Xbox Series X. Possibly the PS5 too, but for now that has not been completely confirmed and just assumed.

That all said, Second Extinction is going to take us into a three-player co-op game where we need to head out into the world and eradicate those mutant dinosaurs that have reclaimed Earth. It looks like we will be dropped in from space, so I am guessing this is how humanity survived. Now is just the time that we are going back to killing them all and not handling it from a distance for some reason that will make sure we have a video game to enjoy. Maybe the beta for Second Extinction that you can currently sign up for will offer up a bit more of a justification. Nonetheless, the game looks like it will be a high-pace action ordeal with all kinds of crazy beasts to take out. Have a look at the first trailer for the game just a bit lower down.

Second Extinction is an intense three-player cooperative shooter, where your goal is to wipe out the mutated dinosaurs that have taken over the planet. Teamwork is vital as you adopt the role of one of the survivors, using a unique combination of weapons, abilities, and skills to take on the vast number of enemies. Fight through a maelstrom of bullets, bombs, teeth, claws, and gore, it’s up to you to reclaim Earth!

How excited are you to see that games like Second Extinction could be making a revival to one of the other big threats our video games should have? Do you think that we will always have to play in co-op mode or will there be options to allow for us to play solo or with only one other friend? Do you think we will have a good reason as to why we do not just wipe them out from space beside "video game" or will that be the big reason for it all? Let us all know down in the comments and then feel free to discuss it all. For more on Second Extinction, be sure to keep checking in here. We will keep the news flowing out there for you to keep you up to date.