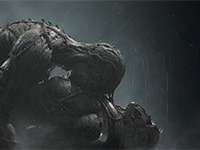 Talk about a long wait, but we finally have something new to see for Scorn after its announcement so long ago. Not only something new to see but also something to see as Ebb Software will be having it run on the Xbox Series X on top of the PC when it launches. That is the easy way of saying that Scorn will be coming to the platform there when the console finally launches this Holiday season. One could also read that it will be an exclusive for the console there, but it also sounds like it will be a timed exclusive there for the launch of the console. Definites have not been fully laid out again and we are left to speculate.

That all said, the latest footage for Scorn is not the most action-packed, but it does a better job of showing how pretty and creepy the game can look on the system here. Something that a few other games have not been able to nail down well in the mix here. All of which looks like something out of H.R. Giger's daydreams. That is not anything new for those following along with Scorn for a while now, but we do get to see it all in a bit more glory than normal. You can see all of that just below in the trailer we have been hyping up so far and then form your own opinion.

Following today’s Xbox 20/20 online showcase, independent studio Ebb Software is pleased to announce that its forthcoming first-person horror adventure Scorn will be exclusive to Xbox Series X at game launch. Highly anticipated by horror fans for its powerful visual style and dense atmosphere, Scorn was presented as part of the forthcoming line up for Xbox Series X with the exclusive reveal of a brand new trailer. The game is planned for release during the Xbox Series X launch period.

Scorn lures players into a claustrophobic underworld populated with misshapen organic forms dripping with unnamed fluids. You will find yourself entirely alone, with only your senses and instincts to guide you through the non-linear nightmare of interconnected spaces. In Scorn, the environment is itself a character and will do its best to unsettle and unbalance you. Each location has its own puzzles, characters, and story to tell, all of which combine to create a cohesive world. On your journey through the game, new areas, skills, weapons, and items will be unveiled as you attempt to comprehend the unfolding reality of Scorn.

Are you excited to see that Scorn will be heading to a console platform too now or did you expect it to happen? Does this look like what you expected things to look like on the Xbox Series X or are you still looking for more? Do you think that it will be heading over to the other systems at some point or will it truly be an Xbox exclusive? Let us all know down in the comments and then feel free to discuss it all. When we have more to share for Scorn here, we will offer it all up for you. Be sure to keep checking in for all of that and much more.