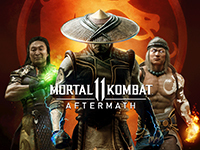 The story for Mortal Kombat 11 is not over it would seem, as we have a new expansion coming for the game to continue the story on a bit more. How much more, that is not fully explained by NetherRealm Studios here but given that we are looking at a $39.99 USD price tag it should be beefy. That would be the hope at least. Given that this is going to be called Mortal Kombat 11: Afterlife it should be taking in all of the events that will bridge between this and the next big title to come. There were a lot of things left open and the timeline needs to be fixed a bit. We also need a few more characters in the mix of things to further expand it all too. Thankfully, that is also something coming along here.

Yes, we are getting a few more characters from Mortal Kombat's past with Sheeva and Fujin in the fight again. We are also going to be seeing Robocop from the original films, with the original actor back, in the mix to so we have more guest characters even as we wait for a few more to get added in. That and we are also getting the return of Friendships for finishers in Mortal Kombat 11: Afterlife here so it does not always have to end in blood. That or the mixture of stage finishers that will be added in for free if you own the game or buy any of the upcoming bundles for this expansion. Something that can be done now as the digital release of it all is coming on May 26th. With a full physical bundle for the core game and expansion this coming June. The epic saga continues in Mortal Kombat 11: Aftermath, as Fire God Liu Kang, the new keeper of time and protector of Earthrealm, must now enlist the help of unlikely allies and familiar foes to forge a new history as the fate of two worlds hang in the balance. Adding to the growing roster of playable fighters, the new expansion features the triumphant return of Fujin, the God of Wind who serves as Earthrealm’s protector alongside his brother Raiden, and Sheeva, the four-armed, half-human and half-dragon queen of the ancient Shokan race. RoboCop, the iconic, highly advanced cybernetic police officer will make his first appearance in the franchise, continuing the pedigree of popular Mortal Kombat guest fighters. RoboCop in Mortal Kombat 11: Aftermath features the voice and likeness of actor Peter Weller, who portrayed the popular character in both the original “RoboCop” (1987) film and “RoboCop 2” (1990) sequel. Mortal Kombat 11: Aftermath will also include three new character skin packs to be released over time.

Additionally, all Mortal Kombat 11 owners will have access to new Stages, including the return of the Klassic Dead Pool and Soul Chamber arenas, accompanied by Stage Fatalities, the fan-favorite finishing moves that use the environment to destroy opponents, and the popular Friendships feature from the ‘90s, which allows players to take down their adversaries with a hint of kindness. These features will be available as a free content update in conjunction with the Mortal Kombat 11: Aftermath release. Are you shocked that Mortal Kombat 11 is getting a full expansion here and not just a few new characters? Did you expect that they would be doing a follow-up game instead to fix all of the timeline issues or is it good to get it all fixed now for any future installments? Do you suspect that we will see three more characters added into the mix at a later date given how the fighter packs have been and are you still holding out for Ash? Let us all know down in the comments and then feel free to discuss it all. If there is more to share for Mortal Kombat 11: Afterlife, or the franchise in general, we will share it all here. Just be sure to keep checking in for all of that.