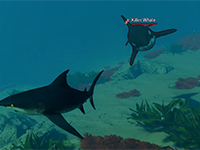 The final developer diary for Maneater is here to take us on a little journey through the tone, premise, and other funs we are going to get with Maneater

We are so close to getting the shARkPG that is Maneater in our hands and now we have one more final look at the game before May 22nd. The final developer diary for those looking to see what Blindside Interactive has been toying with over the last few years. Also a new video to get a better idea on what will be coming out with this Tripwire Interactive title. Maneater is all about us getting to play the deadly shark in a video game and it looks like it will be a bit more than that. Outside of the usual RPG elements of upgrading and evolving as we set out on a mission to do what sharks do best. With a little extra flair as this is a video game still and swimming and eating fish would get boring after a while.

In the latest video here for Maneater, though, we get a better understanding of how the story is going to unfold. We all knew it was going to be in the form of a documentary with the fun voice overs. Now it sounds like this is going to be the final version of that show, which to me sounds like how they are going to handle game over screens. The wrong edit of events or something. All while capturing the real events with sophisticated drones that will highlight the audio choices for Maneater to give us a better feel for it all. We will need it as we hunt down all of those motion-captured humans out there. Something that is also fun to see in this new video as they get directions that they are being eaten by a shark that is on land. Have a look and get ready for the final launch in a few weeks.

We are pleased to share the final installation in the Maneater Developer Diary Series!

Maneater Developer Diary 4: The Final Countdown comes ahead of Maneater’s launch on May 22nd for PC via Epic Games Store, PlayStation 4, and Xbox One. The release date for the Nintendo Switch version has not been announced yet but will release later this year.

Dive in for the final chapter of this developer diary series, detailing Maneater’s unique tone, premise, and presentation. View the sea through the eyes of Tripwire Interactive’s animators, directors, and artists, as they describe the visual, aural, and interactive detail in this whale of a tale. You won’t want to miss this final chance to learn more about gaming’s first open-world action-RPG (shARkPG) where players Eat, Explore, and Evolve!

Are you ready to dive into Maneater here soon and did you expect it to be as big of a spectacle as it is? Do you like the fun changes in audio as you go from underwater to above water or will it get jarring in the long run of it all? Do you agree that the story process will be handled in the way I described for the game over screens or will there be something vastly different? Let us and all of the other land-dwelling creatures out there know what you are thinking down in the comments and then discuss. If there is anything further to share for Maneater, you know we will have it all here. Just be sure to keep checking in for all of that and much more.