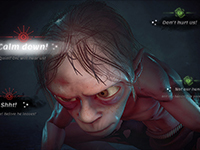 Screenshots for The Lord Of The Rings: Gollum are here to give us a look at the game and just how Gollum will be sneaking about the world

If you did not know that The Lord Of The Rings: Gollum is going to be a thing, now you do and it is coming from Daedalic Entertainment in 2021 on the PS5, Xbox Series X, and PC. It feels like it was announced out there by someone before now but here we are with the first screenshots so that is a moot point as of now. All of which is fine and now we have a look at how Gollum will be moving about the world and surviving in his own game that is not supposed to be linked to any of the other forms of media outside of the core content. That sounds weird to say, but it is and even slightly using the look set forth by the films out there.

Even though it is hard to see here, The Lord Of The Rings: Gollum is a stealth adventure set in the world and most likely following some of the off-screen adventures of the character here. It looks like there will be a bit of an inner monologue choice option along the way or something that mimics that and the loss of sanity for the character. All of which will sounds and looks like a version of Stix but just with Gollum as the lead. Even if it all looks a bit "cartoony" here and not the serious version of things as the Middle-Earth games looked. You can see what I am talking about just below, though. Do you remember this Gollum game getting announced before or is this all news to you too? Do you like the look and feel of it all here or is it a bit off for a next-gen game out there? Does it feel like we will have choices throughout the game via the voices in his head or is that just how they are going to offer up the story in general? Let us all know down in the comments and then feel free to discuss it all. If there is more to offer up for The Lord Of The Rings: Gollum, we will have it all here. Be sure to keep checking back in here for all of it.