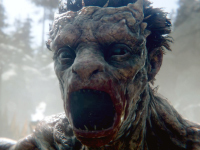 It is time to put a pin in Darkborn, as it looks like it will no longer be heading to the PC, PS4, or Xbox One now. Not that The Outsiders has opted to go with a different platform or style for the game but that it has been more or less put on hold. Some read it is as canceled, but it is more like they have just stopped working on Darkborn after the four years that have been put in already. The specifics on why it was halted is not fully given, but it is not because the studio is shutting down. If that was a concern you had here as well.

All of this comes from the developer directly from their social media account where little else was to offer outside of the fact they are working on something else. It is a bit odd as Darkborn has shifted over the years from one name to another and there was a solid bit of gameplay we had to see in this game here. It has been included below so you know what we may be missing out on here now. That is not to say that Darkborn might still not live on, but it is just on an extended hold as the team moves on to other things. None of which makes sense to me after all this time, but it is what it is.

Were you still excited for Darkborn before now or did it fall of the list with such little placed out there in general? Do you think it will still live on in another four years or will it just be a memory of the past still? What do you think will be the next title that the team is working on here or will it be years before we get to know? Let us all know down in the comments and then feel free to discuss it all too. If there is more for Darkborn at all, we will bring it all to you as best as we can.