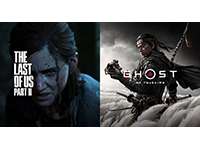 Many out there were scared that there was an open-ended release date for The Last Of Us Part II and in turn Ghost Of Tsushima given how all of this pandemic has shifted things around. Both were delayed and with no real release window in site besides when it was ready to be released. Something that could have gone on for a while given things here. Now we are glad to confirm that we have release dates again for The Last Of Us Part II and Ghost Of Tsushima to look forward to on the PS4. Those being June 19th and July 17th respectively.

Both The Last Of Us Part II and Ghost Of Tsushima would have been on the verge of release or released as of right now based on the original dates we had way back when, but now we only have a few more months of wait to have to do here. Thankfully, as our gaming lists have been dwindling more and more with us all having the time to hit up our backlogs more now. Now that we have the dates, though, it might be time to give The Last Of Us a good old play through again to get back up to speed on everything once more. Even if some of the themes and notes hit a little too close to home with the virus outbreak and all we have here. It is fungus monsters more than just the death of humanity, so there is that…

Release Date Updates For The Last Of Us Part II, Ghost Of Tsushima

As our teams at Sony Interactive Entertainment and Worldwide Studios approach development milestones and confront a world changed by COVID-19, we find ourselves having to adapt to today’s ever-changing environment. Amidst some disruptions to our working styles, we wanted to provide an update to PlayStation gamers who are eager to learn when our next exclusive titles will arrive to PlayStation 4.

As we begin to see an ease in the global distribution environment, I am pleased to confirm that The Last Of Us Part II will arrive on June 19. And Ghost Of Tsushima will follow on July 17.

I want to personally congratulate and thank both the teams at Naughty Dog and Sucker Punch Productions on their achievements, as we know it’s not an easy feat to reach the finish line under these circumstances. Both teams have worked hard to deliver world-class experiences, and we can’t wait to see what you think of them when they release in just a few short months.

And finally, I want to thank the PlayStation Community for their continuous support and patience.

Were you expecting to see The Last Of Us Part II pushed out much further than we have now or did you expect a Summer release to hit us? Did you remember the original date set down for it and Ghost or did you just know they were going to be coming at a later date? Will you be adding this to the list of backlog games to plow through before things get back to normal or is it hitting a little too close to home for comfort at this point? Let us and the world out there know what you are thinking down in the comments. If there are further updates for The Last Of Us Part II & Ghost Of Tsushima, we will have them all here. You just need to keep checking back in.