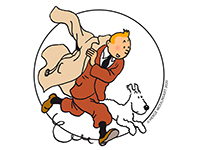 It looks like with the celebration that Microids is now 35 years old, we are getting an announcement that a video game in the world of the comic Tintin is also in the works. In the works for the PC and consoles, presumably the PS4 and Xbox One, with little more to go on. Well, outside of the core cast of characters people know from the Tintin line will be in there and then we are looking at an action-adventure game with it all. Something that totally makes sense given the source material. You have to love when we get these basic of announcements here for video games to try to get excited for. If the IP is not enough, in general, that is.

Sadly, outside of an image of Tintin and the basic description we have here, there is not much else to say. It is announced and coming with something we can kind of expect along the lines of the animated film. Unless that is the not the action-adventure path they are going to go with. Given what they can do with the franchise and the fans that have been around forever for Tintin, I am certain it will sell even if it is just a basic thing. Hells, it could break the industry with some innovations if it is played correctly, but for now, we just know it is coming. Have a look and see the basics that have been laid out already and see if there is more than meets the eye right now. Billions of blue blistering barnacles: the publisher Microids is now 35 years old! To celebrate this, a nice announcement is published…

Tintin and his dear Snowy will soon make a comeback on PC and consoles. Microids and Moulinsart are delighted to announce the signature of a partnership for the development and publishing based on the comic book series « The Adventures Of Tintin » created by Hergé, published by Casterman and selling more than 250,000,000 books.

This new action-adventure game will transport the player into a whirlwind of incredible situations and suspense hand in hand with the legendary Tintin and Snowy characters. Other iconic characters will join the cast like the renowned captain Haddock, fond of fine whiskey and sophisticated slurs, the genius professor Calculus and the finest detectives Thomson & Thompson.

After navigating all seas, exploring numerous continents, doing some deep-sea diving in a submarine and even walking on the Moon, the most famous reporter is ready for some brand new interactive adventures.

Have you been waiting for a Tintin game to come out or are you part of the world that has little knowledge of the character and IP still? Do you think it could be a lot like the film was with us at the helm or will it be nostalgia bait as these usually are? Could we see some kind of crazy innovation for the industry here or will it be a paint by numbers kind of thing? Let us all know your thoughts on this down in the comments and then feel free to discuss it all. For more on what this new Tintin title could be, be sure to keep checking back in here. We will keep it all coming at you as best as we can.