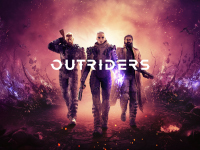 We have a new and small update for Outriders to go over here today. Well, more of an emphasis on small than anything as we have had a few short video clips released out there in the wilds of twitter from People Can Fly so they can highlight parts of the character classes we are going to get to play in the game. Even though we only have three of the four classes currently, we have short looks at them here for Outriders to see how some of their abilities will work in the game, as well as how they will look. Some are more explosive than others with the pun fully intended there for it all. Sadly, still with no release date for the game on the PC, Xbox One, Xbox Series X, PS4, or PS5 to go along with.

It looks like we have more for the Trickster and Devastator classes here for Outriders and how some of the traps and temporal skills will be used. That is if you want to ignore the more "Hulky" abilities of the Devastator here. Both of which seem to fit the name of the class fairly well. If only it was in a better format to allow for a finer view for the Outriders gameplay here. It would be nice to have here, but they chose which platforms they want to share on and some of those have some limitations. Nonetheless, have a look at what is out there and get a bit more excited for the game.

As a Trickster, you can use your Slow Trap ability in a number of ways, such as slowing down enemies to avoid being swarmed! #Outriders pic.twitter.com/oqZE4TD1F3

As a Devastator, impale your enemies by conjuring stone spikes from the ground itself. #Outriders pic.twitter.com/4tmLSwfM7s

Jump-slam into battle by activating your melee attack whilst sprinting. #Outriders pic.twitter.com/rsJz0zJaJ9

As a Trickster, use your Temporal Slice to cut through all adversaries you encounter with explosive, X-ray results. #Outriders pic.twitter.com/dhRMs0wkHn

Were you hoping for a bit more for Outriders here or did you enjoy this small little tease we have been given here? Do you agree that the abilities do seem to fit the names of the classes or do things need to be shifted a bit more? What do you think the fourth class will have for it or will it be a weird balance of the three we already have? Let us all know down in the comments and then feel free to discuss it all. For more on Outriders, be sure to keep checking back in on the site. We should have a whole lot more to share for you as we get closer to the holidays.