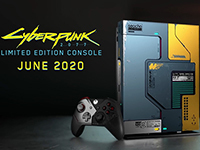 By now many of us that have been following along with Cyberpunk 2077 in all of its forms know that Street Cred is a thing that is in the game. Something that shows off how fancy or impressive we are dressed or adorned in the world we are entering into. It is a weird social currency out there and it looks like CD Projekt RED will be offering us all a way to add to our in the real life. Well, at least in our homes and with our home decor. All of which with a new limited edition Xbox One X all themed around Cyberpunk 2077. Not something that would normally make big news but it all flows into the game and is just as impressive as some of those game bundles out there for the game.

You can see how this new console will look by just looking a bit lower all while seeing how some of the new looks and LED will bring us deeper into the world of Cyberpunk 2077 in some way. It will also come bundled with a new controller with the same style of customization added on to it all with a half-and-half style to demonstrate some of the differences in the world of Cyberpunk. It will also come with the game bundled in and a few other un-named things to further entice you to buy a whole new console before the next-gen ones come out. Unless this is also going to be there for the Xbox Series X and PS5 too. There is no word on that so that is most likely a pipedream to have here. Now just to see how much it will all cost us if we go down this path…

Created in collaboration between designers from CD Projekt RED and Microsoft, the limited-edition, 1TB console encapsulates the urban decay and vibrant tech of Night City. Its design features glow-in-the-dark elements, custom decorative panels, LEDs, color-shift effects, and textures — all evoking numerous facets of Cyberpunk 2077’s dark future setting. The console comes with an Xbox wireless controller uniquely inspired by the character of Johnny Silverhand, featuring a half natural, half cyber-enhancement chrome design. Available as part of the bundle later this year, the controller can also be purchased separately right now at select retailers, including the Microsoft Store. Are you interested in picking up this console and show off a bit more of your Cyberpunk 2077 fandom? Do you think that there will truly be more to it on top of the basic LED light, glow-in-the-dark paint, and special panels added to the system here? Could we see a limited version of these on the next-gen consoles too or will it be just for the Xbox One X here? Let us all know down in the comments what you are thinking and then feel free to discuss it all. For more on Cyberpunk 2077 in all forms, be sure to keep checking in here. We will keep it all coming at you as best as we can.