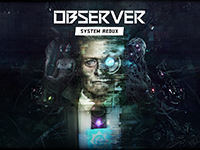 The full reveal for Observer: System Redux is here now with new content coming for Observer on the next-gen systems out there

We have been waiting for a while now and here we go with a full reveal for Observer: System Redux that will be heading to the PS5 and Xbox Series X this coming holiday season. Today is the day that Bloober Team is finally bringing us a look at the new version of the game with all of the upgrades we can expect. All so more can experience and give the Observer game a go for once or again. This time, with some new story content mixed right into it all. That is at least something that will be above and beyond the usual 4K upgrades and retextures that are the usual thing we are given. That is a nice little bit of an update to enjoy more.

Obviously, you can have a look at the first full trailer for Observer: System Redux just below. It is also a good look at one of the final performances that Rutger Hauer was able to give us before passing. A cyberpunk all-star for certain and it will be interesting to see how they offer up this new content with the limitation of losing his voice for the game. They could go all silent with the scenes, but it would be a bit off if they did that and not just have a voice actor to attempt to recreate his voice for Observer. I guess we will know this holiday when the systems and game come out for us all.

Bloober Team has rebuilt its award-winning cyberpunk thriller, Observer, with augmented visuals, gameplay, and story as Observer: System Redux for next-generation consoles. Considered one of the scariest games currently available, and one the best cyberpunk games coming to next-generation consoles, System Redux is the definitive vision of this horror tale, coming for the 2020 holiday season.

The unique blend of cyberpunk and horror in System Redux features Rutger Hauer in one of his last voice-acting roles (Dan Lazarski/Observer) and the team views the title as a tribute to the late film star. The game also stars Polish musician and actor Arkadiusz Jakubik as Janus Jukowski, a veteran struggling with early model cybernetics.

While System Redux is a remaster of the original Observer, it features some completely new, never-seen-before story.

The future has turned out much darker than anyone could imagine. First, there was the Nanophage. A digital plague that killed thousands upon thousands of those who chose to augment their minds and bodies.

Then came the War, leaving both the West and the East decimated and shattered. With no one left to seize power, corporations took over and forged their own crooked empires.

You are a tool of corporate oppression. Feared and despised, you hack into the darkest corners of your suspects’ minds. You creep into their dreams, expose their fears, and extract whatever your investigation may require.

You are an Observer.

Are you excited to finally see a bit of what Observer: System Redux will be bringing us here? Do you think they will have a different voice for the new content or will it all be silent for those portions? Do you think that we will see all of these updates for the past versions of the game or will it only be for those that pick it up for a second time? Let us all know down in the comments and then feel free to discuss it all. For more on Observer: System Redux, be sure to keep checking in here. We will keep it all coming to you as best as we can.