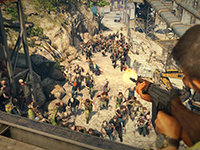 A new version of World War Z is on its way on May 5th for the PS4, Xbox One, and PC. A Game of the Year edition of the game is now coming from Saber Interactive for all of those out there that may have missed out when the game first launched and did not want to pick up all the DLC along the way. Although, this new edition is bringing with it some more updates for World War Z too and a new "episode" to play through in the ever-growing story. I will assume it will be heading to the base version of the game for those that have been experiencing it all as it comes out already, but it is not explicitly stated here. It would be a bit odd if it did not.

Obviously, this version of World War Z will be a bit cheaper than we paid back in the day for it and will house all of the DLC. The new episode here will take us to the French city of Marseille with some new weapons and gear to aid in the killing of the undead. Mix in some new character skins for it all, and we have a nice new expansion for World War Z in this new bundle too. All of which will still house its cross-play and other modes that have come out since launch too. All worth noting as this is going to be more for the newcomers to the game than anyone that has been in it to win it since it first launched. Have a look at the new lands now and see what is still to come. Available on May 5 for $44.99 on the Epic Games Store for PC and $49.99 on Xbox One, and PlayStation 4, World War Z Game of the Year Edition delivers the full base game and all existing and upcoming content featured in its season pass, including:

Players also get access to a year’s worth of free content added to World War Z since it launched, including the wave-based Horde Mode Z, Xbox One-PC crossplay, new PvE missions and enemies, a weekly challenge mode, extreme six-skulls difficulty setting and more, as well as a new playable class with a unique skill tree and abilities, coming in a free update later this year.

Did you expect there to be a new edition for World War Z or did you think we were just going to be getting the normal bundles along the way? Are you excited to see this new episode for the game or is going to France not on your list here? Is it a bit weird to see more for this game right now given the world affairs or is it the right time as it is usually about humans overcoming great odds? Let us all know down in the comments and then feel free to discuss it all along the way. If there is more for World War Z, you know we will have it all here. Be sure to keep checking in for all of that and much more.