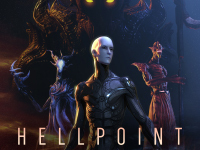 If you were looking forward to the new Sci-Fi horror game Hellpoint to drop on us on April 16th, you are going to be letdown now as it will no longer be making that release date. Sadly, it looks like Cradle Games and tinyBuild have been forced to push it out a bit longer due to the COVID-19 pandemic that we are still deep into. There is no word on when Hellpoint will actually hit the PS4, Xbox One, Switch, and PC. There is only a release window now of Q2 of this year. So, that is not a huge delay but it is still a bit of a delay to be had.

Hopefully, this is going to give them a bit more time to work on and perfect Hellpoint just a bit more than they could before next week and thus lead us to a better game in the end. If that is going to actually be the case is not defined here, but it could. Sadly, given the sudden delay I have a feeling that it comes down to the slowing of the approval process all of these titles are going through on their respective platforms and Hellpoint is just a victim of things slowing down along the way. We will know for certain in a few months when and if the game still makes the timeline laid out there.

We at Cradle Games and tinyBuild would like to address all of you regarding a very important matter.

For several long years, Cradle Games have dedicated ourselves to one common endeavor: developing a kickass experience for all of you hardcore RPG enthusiasts out there—our occult sci-fi horror game Hellpoint. While we’re sure you were excited for Hellpoint’s launch next week, we must announce that the situation has regrettably changed.

The release of Hellpoint is being postponed for reasons you are almost certainly aware of. The COVID-19 pandemic is impacting businesses worldwide, and, unfortunately, Cradle Games are feeling the strain as well. Worry not though; Hellpoint won’t be delayed for long. The game, previously set to be released on April 16, is now scheduled for release before the end of Q2 2020.

We know you are disappointed by this sudden delay. Believe us—we’re equally frustrated having to do this at such short notice. However, the delay presents an opportunity to release an even better game this summer. Everyone at our studio is excited to use this additional time to further polish the game, and also address the feedback we have gathered from players of The Thespian Feast, making improvements that we feel will make Hellpoint an even better gaming experience for everybody.

We hope you understand our intentions and we also hope you will stick with us for a couple of extra months. The support of the community is crucial for us. Thank you for all your love and encouragement! Let’s kick some ass!

And please, stay safe, would you? It is what matters most in the world right now…

The crews at Cradle Games and tinyBuild

Were you hoping to be able to play Hellpoint in the coming week or did it fall off the radar until it was brought back up here? Do you think it will be closer to the beginning of Q2 or will it be near the end of it all? Do you think it is because of the approval process or could they have found a game-breaking bug and opted to pull the release instead of giving us a broken game? Let us all know your thoughts down in the comments and then feel free to discuss it all as you wish. For more on Hellpoint as it comes, be sure to check in here. We will be as up to date with it all as we can be.