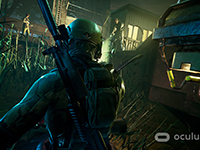 The release date is set for Phantom: Covert Ops for this June and we have a bit more to see on how these Phantom soldiers will be handling

We have a release date now for when we can expect Phantom: Covert Ops to land on the PC VR platforms out there. Well, more on the one platform given the deal that nDreams has with the Oculus but that is neither here nor there. It is not going to change the fact that those looking to go virtual with the stealthy military group that uses kayaks to sneak it will have their chance to do so in June. Specifically, June 25th with that being the release date for Phantom: Covert Ops over there. Things can always change but for now that it is the date to help keep us inside if we are still doing that by that time. It would be a nice escape to have, though.

For those unfamiliar with Phantom: Covert Ops, you can see a little bit of the gameplay below, but it is a game that has us taking on the role of a soldier in a real-world military unit that is used for quick stealth operations along the water. Propulsion in the game will be via paddling our virtual kayak around the rivers, lakes, ponds, etc. where the enemies have set up and take them down for our objectives. We will need to make use of vegetation and other aspects in the world to stay hidden while we deploy some of the silent and deadly hardware we have in the boat. Phantom: Covert Ops was a blast when I had a chance to give it a go in its less-polished form, so I can only imagine how much it has advanced since then.

Get the latest news on the release of Phantom: Covert Ops in this all-new trailer!

You are a Phantom: a lethal military asset with one night to stop an all-out war. This is stealth-action redefined for VR, coming to Oculus Quest & the Rift Platform on June 25th 2020.

Are you ready to get into the role of the soldier in Phantom: Covert Ops or did it fall off the radar until now? Is June too far out for you at this moment or is it a nice little thing to keep focused on? Will this be how some of us are going to spend our little bonuses to expand our gaming or will it be something you admire from a distance? Let us and the world know down in the comments and then feel free to discuss it all. For more on Phantom: Covert Ops, be sure to keep checking in here. We will keep all of that flowing out to you as best we can.