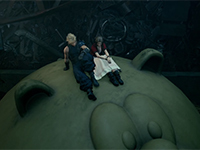 We are a week out from Final Fantasy VII Remake hitting the PS4 and now we have the final trailer they are going to officially drop for it all before then. That would be the assumption as this latest one offers up a whole lot of minor spoilers for the game. Something that is a bit shocking from Square Enix to do when they asked everyone to not share spoilers if they received the game early. It is what it is and you have been warned if you are looking to go into Final Fantasy VII Remake as blind as possible. Even if some of it is just going to be carried over from the original game shot for shot. It is a weird place to be with it all right now.

What you will get to see here is a whole lot more on the classic and new characters for Final Fantasy VII in motion. A few new locations and a bit of a reminder as to what is going on in the story is mixed in here too. Least of all to mention that it looks like we have a tease of what will happen when we exit Midgar in this "episode" of it all. If you plan on skipping it all, though, also note that you can start preloading the larger digital version of Final Fantasy VII Remake as you are reading this. Obviously, you will not be able to play until April 10th, but there will be no delay if you go through the massive download process here.

The story of this first, standalone game in the Final Fantasy VII Remake project covers up to the party’s escape from Midgar, and goes deeper into the events occurring in Midgar than the original Final Fantasy VII.

The world is under the control of Shinra, a corporation controlling the planet's life force as mako energy. In the city of Midgar, Cloud Strife, a former member of Shinra's elite SOLDIER unit now turned mercenary lends his aid to the Avalanche resistance group, unaware of the epic consequences that await him.

Did you watch the trailer here for Final Fantasy VII Remake or did you skip it so you can be surprised more from the actual gameplay? What part of Midgar are you the most excited to see in this game or are you more looking to get out of Midgar for the future content? Do you think we are going to get even more action than we remember from before for it all or will it just feel that way given the updates? Let us all know down in the comments and then feel free to discuss it all. If there is more to share for Final Fantasy VII Remake, we will share it all here. Be sure to keep checking in on all of this and much more.