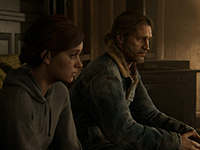 With so many things getting delays or canceled, it is unfortunate that we now have to add The Last Of Us Part II to that growing list out there. No, it has not been canceled but it will be delayed yet again. The last date change placed it out there on May 29th for all of those PS4 fans. Now there does not seem to be a date that we can look forward to playing The Last Of Us Part II as Naughty Dog needed to delay that game indefinitely. It is still going to come out, there is just no date in sight given everything that is going on in the world right now. That and this would be a weird time to place another apocalypse-driven story game out there too. Not that it is exactly the same or anything.

The big reason, as I am sure you can figure out, has to deal with the global pandemic going on right now. While there is no wording that specifically dictates it here, it looks like the developer is worried that The Last Of Us Part II will not be able to reach everyone out there that is looking forward to the game. Be that due to shipping restraints or, the more likely, lack of physical manufacturing still open to produce the disks and other physical items many have paid for already. Given how the story of The Last Of Us and this one will be, it sounds like they are trying to make sure we all have the same experience and not one where the digital owners can ruin things for others. That is how it sounds to me from the recent update.

It is not all sad news here for The Last Of Us Part II, though, as it looks like we have a new batch of screenshots to look at for the game. Some depressing, some exciting, some on the horror side of it all, but all of it showing that the game is almost done and when things start to flow back to normal we will get to join the saga of Elle and Joel once more. Here is to hoping that will be a lot sooner rather than later.

As you've likely just seen, the release of The Last Of Us Part II has been delayed. We're sure this news is just as disappointing to you as it is to us. We wanted to reach out to all of you in our community to give you a little more information.

The good news is, we're nearly done with development of The Last Of Us Part II. We are in the midst of fixing our final bugs.

However, even with us finishing the game, we were faced with the reality that due to logistics beyond our control, we couldn't launch The Last Of Us Part II to our satisfaction. We want to make sure everyone gets to play The Last Of Us Part II around the same time, ensuring that we're doing everything possible to preserve the best experience for everyone. This meant delaying the game until such a time where we can solve these logistic issues.

We were bummed about this decision but ultimately it's what's best and fair to all of our players. We're hoping that this won't be a long delay and we'll update you as soon as we have new information to share.

We wish you all, your families, and your friends the best of health. Thank you for being amazing fans and your continued support.

Did you have a feeling that The Last Of Us Part II was going to be hit with delays or were you hoping it would have dodged all of this? Do you think that they should still offer up the finished product in digital form even if the physical stuff is not going to be ready? Do you think that there is something more than just the logistics of it all here or could it just be harder to squash bugs now that we are all safe at home? Let us and the world out there know what you are thinking down in the comments and then feel free to discuss. When we have an update for The Last Of Us Part II, we will add it all here. Just be sure to keep checking in for all of that and more.