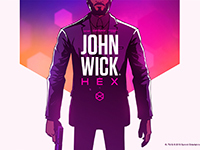 It has been a bit of a wait, but it looks like John Wick Hex now has a release date in sight for the PS4 version of the game. That still leaves the Xbox One out there in the lurch as the PC version came out back in October. It is a weird movie that we have seen here by Bithell Games and Good Shepherd Entertainment, but it is what it is. Thankfully, a new wave of gamers will get a chance to experience John Wick Hex on the PS4 on May 5th of this year. If I had to venture a guess, we will see the other dates shortly after this. That is purely speculation at this point though.

For those that are not in the loop, John Wick Hex is a strategy game that has us in the place of the titular badass from the films. It is all stylized to have a bit more of a cartoon flair to all of the violence, but it still has everything we have come to love from the films mixed in. Well, outside of the voice of the main role but that is a different thing altogether. It will let us pretend to be John Wick and then replay some of the action to see if we can do better in our cinematography on later runs. Have a look at some of what the game is about and then get ready to add one more title to the mix this May.

Created in close cooperation with the creative teams behind the films, John Wick Hex is fight-choreographed chess brought to life as a video game, capturing the series’ signature gun-fu style while expanding its story universe. Players must choose every action and attack they make while considering their immediate cost and consequences. Every move in John Wick Hex feels like a scene from the movies, and every fight contributes to your progress on the job and requires precise strategic thinking.

Perform well and progress in the main story mode (which features an original story created for the game) to unlock new weapons, suit options and locations. Each weapon changes up the tactics you’ll use and the manner in which you’ll play. Ammo is finite and realistically simulated, so time your reloads and make the most of the weapons you scavenge on the job.

John Wick Hex complements the style of the films with a unique graphic noir art design and features the world-class voice talents of Ian McShane, Lance Reddick, and Troy Baker amongst its stellar cast.

Did you miss out on John Wick Hex back when it launched on PC or were you waiting for a console release to pick it up? Is it weird that we only have one console listed now or could it just be that there was a deal struck to keep it exclusive for a bit as we have seen with other titles? Will you be able to forgive the voice acting not being all of the characters from the film it is linked to or does that matter when you are kicking balls, shooting faces, and ignoring names? Let us all know down in the comments what you are thinking and then feel free to discuss it all. If there is more for John Wick Hex, we will share it all on the site. Be sure to keep coming back for all of that.