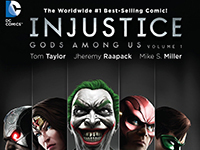 Needing to give yourself a break from Netflix and Games for a minute? Try reading the Injustice: Gods Among Us comics

The Injustice series was written by Tom Taylor and Brian Buccellato, and illustrated by a number of artists, including Jheremy Raapack, Mike S. Miller, Bruno Redondo, and Tom Derenick just to name a few.

Though, most comics based on video games tend to be shameless sell-outs for cash, Injustice: Gods Among Us is well written and illustrated. It has defiantly been binge-worthy, there are plenty of issues to read as well. All to keep us further entertained in these harder times.

Injustice tells a dystopian tale of a Superman who has lost his hope and his way. A world where all heroes, and even villains, are forced to draw a line and take sides against each other, in a massive war, leaving humanity caught in the middle. The deeper the reader falls down the rabbit hole of Injustice: Gods Among Us, the more they realize, there is no way out and, no turning back for anyone. The war continues and the fatalities pile up. Who will yield first? Our Heroes continue to make hard decisions and break moral codes we never thought possible before.

If you are a fan of Injustice: Gods Among Us or Injustice 2, or new to the series, the story is well thought out. Along with all great comic literature, the characters are pulled through dynamic plots and made to endure events they never thought possible.

Injustice: Gods Among Us was published digitally by DC Comics in 2013, and based on the highly acclaimed video game series. A digital copy of the comics was provided by the publisher for reviewing purposes.