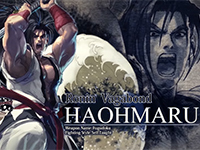 The next DLC character for Soulcalibur VI is almost here, as Haohmaru is leaping into action on this title from the one he made his debut on. That other title being Samurai Shodown for those not well versed in it all. Bandai Namco was able to get the use of the character here and on March 31st he will be gracing the PS4, Xbox One, and PC versions of Soulcalibur VI to bring in a new brand of combat. Well, his brand of combat since he is fitting into this new world and will be bound to the gameplay mechanics that have been set up there instead of his home one. It is how it all goes for now. No worries there at all.

None of this is fully new information for Soulcalibur VI with him being announced as part of the Season of DLC here. Now we just get to see him in action a bit below and how he will be voiced in the game. All things that many fans of Soulcalibur should be interested in as he adds in just a bit more variety to it all. There is not much else to say about it all, so we will just let you have a look at him in motion just below before he lands tomorrow. Thankfully, it is not much of a wait here for it all. I will totally take it and let it flow for now.

Haohmaru is ready to show the cast of Soulcalibur VI what it means to be a warrior!

Prepare to embrace death when Haohmaru from Samurai Shodown joins the stage of history as part of DLC 9 & 10 arriving March 31st!

Was this the DLC character for Soulcalibur VI that you have had your eye on here or were you waiting for a different one to come along? Do you think there will be more of his core title influences here or will he be modified to fit in here more? What other cross-over characters would you like to see come into the game here or would you rather have a new one in the mix? Let us all know down in the comments and then feel free to discuss it all as you wish. For more on Soulcalibur VI, be sure to keep checking in here. We will keep all of the information coming at you as best we can.