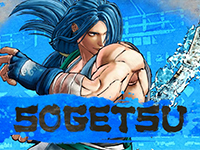 We are all waiting for the next big update for Samurai Shodown, and now it looks like that day will be on April 1st as the next DLC will be hitting the PS4, Xbox One, and Switch versions of the game. No, this is not going to be an April Fool’s Day joke from SNK, just the date that was selected to drop this on the world. It could have been a lot worse and, thankfully, it looks like they are just trying to get more fun out in the world as fast as they can. This is why we are going to just need to welcome Sogetsu Kazama to the roster of Samurai Shodown on this day. If you are keeping this one rolling on and have not tossed the game aside just yet.

This is another character to make the jump forward to this one from Samurai Shodown IV and sounds a bit as he did in the past. Something that I am certain will please many of the long-time fans of the franchise. Even if the character does look to handle like many of the others in the game so far. This could be how the trailer was clipped and the scenes they took from Samurai Shodown to do so, but this one does lack a bit of the flair from the others we have seen. It could also just be me and where I am mentally in the mix of the world too. Have a look at the latest trailer, though, and see for yourself.

Is this the DLC character you have been waiting for to come to Samurai Shodown or are you still waiting for a different one? Do you think that Sogetsu looks to function as many others have or does he look to be truly unique here? Are you glad to hear that it sounds like they have the same voice for the character or does that even matter in a fast-pace fighter like this one? Let us all know down in the comments what you are thinking and then feel free to discuss it all. For more on Samurai Shodown, be sure to keep checking back in here. We will keep the updates flowing out as best as we can for this title and many more.