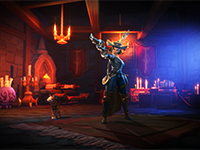 A new class is announced for Torchlight III for us to see get added into the mix of the team here. We have had the Dusk Mage, Forged, and Railmaster already. Now we are getting the Sharpshooter class added in by Echtra Games for us to enjoy and add more range to our group. Not only that, but it does look like we are getting a bit more of a pirate feel with this one for Torchlight III as the character does look a bit more like a swashbuckler than a sniper. If you are in on the Alpha for the game currently, you may know a bit better as the rest will have to go on this new trailer and then wait for the game to launch on the PC later in the year.

The trailer below shows off a bit of how the Sharpshooter will function in Torchlight III and the various skills and abilities they will bring along. Outside of just having a bit more range than others, it does sound and look like they will have a few other dirty tricks to pull to regenerate ammo to be used. Something that is going to need to be done so we are not just sitting around or running around with nothing to do. Maybe this will be the next big thing for the Torchlight franchise and we will get to see some more along the way. Have a look at it all below and see what you think about this new class.

Perfect World Entertainment and Echtra Games are excited to unveil the Sharpshooter, the latest hero class for Torchlight III, the newly announced successor to the critically acclaimed Torchlight series. This new class combines careful precision skills with ranged weapons and magical trinkets to strike down enemies from afar. The Sharpshooter is cunning and willing to bend the rules in order to survive the hordes of creatures running rampant in each of the game’s diverse biomes. This new hero class is currently featured in the Closed Alpha for Torchlight III on Steam and will be available to players worldwide when the game officially launches on PC later this year.

Armed with a signature bow, the Sharpshooter can fire off a barrage of shots to destroy enemies from a distance. While exploring the different biomes featured in Torchlight III, players can level up powerful skills that help the Sharpshooter deploy a series of dirty tricks and regenerate precious ammo. The Sharpshooter joins previously announced hero classes including the magical Dusk Mage, mechanized Forged, and locomotive-conducting Railmaster.

What do you think about this new class for Torchlight III here? Do you think we are going to get more classes as we carry forward or will this be the final one we will get before launch? What other dirty tricks do you think the Sharpshooter will have to get more ammo or will it just be the explanation on how they never run out of it all? Let us all know down in the comments about what you are thinking. When there is more to share for Torchlight III, you know I will have it here to share. Be sure to keep coming back to see and hear all of that.