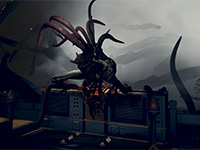 There is no mistake that Moons Of Madness has been out on PC for a while now and some of you might have already had a chance to experience all it has to offer. It was supposed to hit the PS4 and Xbox One around the same time of it all, but after a few delays it was pushed out by Rock Pocket Games to make sure it was able to run on the consoles just as well. Now we are where we are with the launch of Moons Of Madness on the consoles as of right now. Right now being March 24th for those reading this in the future. Hi, again future people. I do hope that you are enjoying your time on Mars much more than the game's protagonist here. Seamless segue, I know.

Anyway, the launch for Moons Of Madness on the consoles is finally here so all of us out there can have a chance to see just how things are unfolding here. Sure, this leaves out one of the other major consoles, but most of those gamers are eyes deep in something far cuter and less scary than we have here. If you do not believe me, have a look at the new trailer we have to help usher in the launch of Moons Of Madness over there. It is a good reminder of what we are all about to get into here. With all of the proper nods and inspirations noticeable to make it another huge horror title to replay in the middle of the night.

Moons Of Madness is a first-person, story-driven cosmic horror game where the scientific exploration of Mars meets the supernatural dread of Lovecraft.

Developed by Rock Pocket Games and published by Funcom, the game was first released on PC on October 2019. On March 24th 2020, the console version was released for Xbox One and PlayStation 4.

Are you ready for Moons Of Madness over on the PS4 and Xbox One or have you already dug into on the PC? Do you think much will be different between the two versions or did that extra time pay off? Do you just need one more distraction in your isolation and this will do just fine? Let us all know what is going on in your head down in the comments and then feel free to discuss it all. For more on Moons Of Madness, be sure to keep checking in here. There may be some updates along the way or it may jump to a new system. We will have it all here if it does.