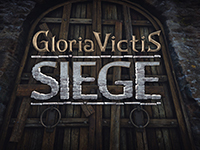 A new survival & resource title, Gloria Victis: Siege, is on its way to us with Gloria Victis giving a unique look at castle sieging

Get ready to see a new side to the world of Gloria Victis, as we have a new resource management and survival title coming to the PC in those lands. FishTankStudio and Black Eye Games are working on a new title that is slated for this year that will have us fighting hunger, injury, disease, and despair as tensions grow higher and higher as forces aim to siege our castle. Here we go with the reveal for Gloria Victis: Siege and just a bit of a feel for what we could be getting in the game. Even if this is a fully pre-rendered video to show us that it is coming and the level of darkness we can expect in the game.

There is no gameplay to look at for Gloria Victis: Siege, but it sounds like it will flow much as This War Of Mine but in a medieval setting with it all. Hopefully you gathered all of that by this point and are a bit ready to know what to expect. What we do get to see here, though, is the build-up to the point where the raiders of the lands have reached the gates and we must survive the siege of it all. We can only guess and speculate what all of that will mean in the terms of the actual gameplay, but it is a fun way to see that Gloria Victis: Siege is on its way just as the raiders of it all. Let us see if it will kick down the gates of our Steam accounts.

The city has fallen, but the castle still stands! Lead a group of trapped civilians helping the remaining soldiers stand against the siege. Sneak out into the fallen city to scavenge resources and craft supplies for your troops. Can you survive against all odds until help arrives?

What do you think about Gloria Victis: Siege as we all get to see here or is it too little on details to know at this point? Do you think we will get to play both sides of the coin or will it always be the same defense no matter what? Do you think we are going to see some of the more prevalent issues of the time mixed in or will it be the usual staples we have seen time and time again? Let us all know down in the comments and then feel free to discuss it all. If there is more to offer for Gloria Victis: Siege, we will add it to the site here. Just be sure to keep checking back in for all of that and more.