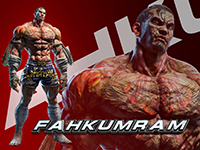 The wait is almost over for the next DLC character to finally hit Tekken 7 over on the PS4, Xbox One, and PC. We all knew that Fahkumram was on the way as Bandai Namco has been fairly open about showing him off in the game. Now we have the date on when he will be joining the roster of Tekken 7. A date that is now set down as March 24th for all of those out there who have the season pass of content added on. Just as it should be as of right now even if it still seems like a bad practice to not just have all of these characters in the mix at launch. There are reasons, though.

If you remember from before, as this is not the first time we have heard of Fahkumram in Tekken 7, this is the big powerhouse that looks to be treated as Hannibal Lector of sorts. Not that he is a serial killer of sorts, but he is a force to be reckoned with and only pulled out for specific instances. As the videos have shown, he is airdropped in to cause some pain in the world of Tekken, and that is how he is getting brought in here. Along with all of the other cosmetic and level changes that will be coming along with him. Have a look at it all below and get ready for the latest character to join in.

Is this the character you have been waiting for to join Tekken 7 or are you waiting for something else? Do you think he is going to be the powerhouse he is shown to be or will it still be down to player skills? What character do you still want to see join in the fun of the game or have you already seen that one in the mix? Let us all know down in the comments and then feel free to discuss it all. For more on Tekken 7, be sure to keep checking in here. We will add all of the updates that we can.