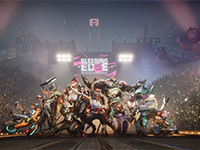 Next week will mark the release date for Bleeding Edge over on the Xbox One and PC, which means that we all have a new trailer to take in to get us more excited for the game. It has not been overly publicized by Ninja Theory all that much, as I have seen, but it is still coming and looks to add a whole lot of fun to the genre it is in. That being the arena-based shooter style of it all even if a good portion of the characters in Bleeding Edge do not look to be just shooters. It is all in a cyberpunk setting so things could always be deceiving here, but it is what it is here. Either way, March 24th is around the corner and we should be ready for it.

If you came looking for more gameplay for Bleeding Edge, you are going to be let down a bit. These look to be none here but all a stylized and fun trailer giving us a sense of the world we will be in. Also the caliber of characters we will be teaming up with as we go 4v4 in these arenas. I mean, there is a dolphin in a bulb and a person that can turn into a Wheeler form Return To Oz, so I am sold here. As long as the gameplay holds up to the hype we are seeing for Bleeding Edge in this trailer, then we might have a solid contender for our time here. We are mostly going to have a good portion of it for a while.

From the studio behind DmC: Devil May Cry and Hellblade: Senua’s Sacrifice comes Bleeding Edge, a fast and frenetic four-versus-four team brawler where every fighter comes mechanically enhanced for mayhem!

Choose your fighter from a diverse cast of colorful characters from the edges of society: burn rubber as bold and beautiful Buttercup with her detachable saw blade arms, wreak havoc as Black-Metal rocker Nidhoggr with his electrifying guitar solos or slash up the streets as Daemon, New York’s most wanted assassin.

Have you been keeping an eye on Bleeding Edge since it was announced or do you think it has been slightly underplayed over the time? Do you think that we will see more shooters and fewer brawlers in this game or is it all just based on how things look here? What has been your favorite character you have seen thus far and which do you think you are going to use as a main? Let us all know down in the comments and then feel free to discuss it all. For more on Bleeding Edge, be sure to keep checking in here. We will keep all of that flowing out to you as best as we can over the weeks and days.