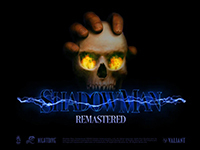 Another title from the past, Shadow Man, is getting remastered as we have the full announcement of Shadow Man Remastered coming soon

We are going to get to add another remaster to the growing list here, as we have the announcement of Shadow Man Remastered coming from Nightdive Studios. That would be the same one that has announced the Blade Runner one and the System Shock one already. They have a lot on their plate here as they are also bringing Shadow Man over to the PS4, Xbox One, and Switch, along with this PC release. Not that the game was never on consoles before, but it is heading to all of the current-gen and possibly next-gen systems when it does launch. Something that is still up in the air at this point.

It has been some time since Shadow Man was out there, so there is most likely a whole lot of gamers out there that have no clue what it is. Even though the same developer here brought us a PC version of it back in 2014, it looks like it is time to give us all of the 4K visuals, new shadows and lighting features, and all of the higher-end audio and models we should expect in today's market. Even if the screenshots we have for Shadow Man Remastered here are a bit on the lower-res side. Maybe that will all get fixed as we wait, but it is what we have to look at here today. Take a look and see what you might be playing here in the future.

Valiant Entertainment has partnered with Nightdive Studios to develop a remastered edition of the classic action-adventure video game Shadow Man. The remastered edition will be coming to Windows PC via the Steam and GOG platforms, as well as to the PlayStation, Xbox, and Switch consoles. This partnership continues Valiant’s expansion into other mediums in addition to publishing.

Shadow Man is the brave and powerful supernatural hero who protects humanity from the sinister demons that lurk in the Deadside and spill into our world. The Shadow Man video game was originally developed by Acclaim Studios and published for the PC, PlayStation, Nintendo 64, and Dreamcast console in 1999. Considered a “lost classic” for years, the PC version of the game was published again in its original form by Nightdive Studios in 2014.

Now the title is being updated using Nightdive’s proprietary KEX engine which has been used to restore classic video games across all digital platforms including System Shock: Enhanced Edition, Turok, Turok 2: Seeds Of Evil, Blood: Fresh Supply, and Forsaken Remastered.

The Remastered version adds a host of features in addition to console support: How are you feeling about Shadow Man getting a remaster or is this a title that you are only now hearing about? Do you think we are going to get fully updated character models or will it stick to what we have here today? Do you think they are just running it through their software and hoping for the best, or are they actually going through vector by vector and fixing things for us? Let us all know down in the comments what you are thinking and then feel free to discuss it all. For more on Shadow Man Remastered as we get it, be sure to keep checking in here. We will keep it all coming to you as best as we can.