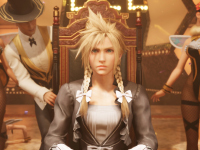 It has been a long and hard road, it seems, to get to the point where we are for the Final Fantasy VII Remake. Something that started out as a project Square Enix said would never happen and now we are just under a month out from the first part of it all hitting us. The first big Midgar part for those fans of the original version and a much larger event than newer fans have seen in the recent demo. Given that it takes a whole lot of work and thought to do what they are doing for Final Fantasy VII here, it is time to look back on just how it all came to be and what the team has reimagined for it all. That is right, here we go with another installment of those behind the scenes videos some of us love out there.

In fact, this one will be the first in a series to get us all amped up for the Final Fantasy VII Remake to hit on April 10th. This first one being an introduction of sorts, but also just how the team went from a tech demo that sparked an idea, to the first major section of the game hitting us. Something that a lot of fans have been curious about as that portion of the game never felt like a full game all by itself. Well, one of the great things learned here for Final Fantasy VII Remake is that we will get to explore more of the upper-class area of Midgar as well as the slums. It will not be a fully open thing to search everything, but way more will be available to make it feel like a full game even though this will be just the first "episode" of it all.

We also have a few looks and details about the new-ish combat system we are getting and the choice to move Final Fantasy VII from a turn-based system to the one we are getting. A system I am still not a huge fan of, but it is where they think the current generation of games are at and so it is what we are getting. Even if they tried to add in a "classic mode" to give the slightest of feels to the original design. Enough from me on all of this, though, as I am sure you want to dive in and see where and how your Final Fantasy VII Remake has been crafted from. You may also just want to skip along as there is not much new in the way of gameplay details to look at and understand. The choice is now yours.

Here’s a question you may have had after playing the recent Final Fantasy VII Remake demo: how did they do all this?

Now you can find out directly from the creators themselves in a brand new video documentary series: Inside Final Fantasy VII Remake.

The first episode The Making of Final Fantasy VII Remake' is out today.

The new multi-part series features interviews with many of the key figures behind Final Fantasy VII Remake, including:

Over the next few weeks, they’ll reveal a treasure trove of behind the scenes information about the game, including the development of the story, characters, combat, action, music, and much more.

Did you expect all of this for the Final Fantasy VII Remake or is some of it new information for yourself? Did you always want to explore more of Midgar in the original version of it all or was it just the right balance? Could we see Advent Children mixed into the grander scheme of this game down the line or will they only be using it for the character designs? Let us all know what you are thinking down in the comments and then feel free to discuss it all. If we have more to share for Final Fantasy VII Remake, you know we will have it all here for you. Be sure to keep checking in for all of that and much more.