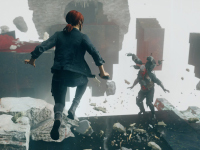 Last week we ended with a bit of news on when the first big expansion for Control was going to drop but no real information on what is going to be coming to it all. That date is still March 26th for those on the PS4 and PC versions of it all. For some reason, Remedy is holding it all off until June 25th for those on the Xbox One. No matter the case, though, we do have a bit of an update and look at what it will add to Control overall. It will be something along the lines of four to five hours of extra gameplay. You can know that before you chose to look at what that we have.

So, it looks like we were a bit correct in speculating that we would be going into the literal foundations of the Federal Bureau of Control here. To some degree, as we will be roaming the tunnels and caves under The Oldest House to try to stop the Astral Plane from consuming it all. Why that would be a terrible thing is something that I feel we will learn during the run of it all, but if you just want new things too then you will be in for a treat. This DLC will add in a new ability called Shape for Control along with an upgrade for the gun called Fracture that will allow Jesse to plow through the underground with a bit more ease. Mix in the fact that we will get access to a Shield Rush upgrade to beat down the new Hiss Sharpened enemy. Have a tease of it all just below.

In The Foundation, the Astral Plane is colliding with our reality. Jesse Faden, the Director of the Federal Bureau of Control, must travel through the caverns of the Foundation to prevent the Astral Plane from consuming the Oldest House. The missing Head of Operations, Helen Marshall, may hold some answers to the mysteries surrounding this threat. As she travels deeper, Jesse will learn more about Marshall's disappearance, and about the enigmatic Board.

The Foundation launches on March 26th on PS4 and the Epic Games Store.

What’s more, all players will receive a FREE update, consisting of the Shield Rush upgrade and an ability to reassign Ability Points! We’re also including quality of life changes, map visuals and much more!

Does this excite you more for Control here or is it still too sparse in information for right now? Do you think that these new enemies will truly be harder for us or will it just be different and with a new look? Why do you think that the Astral Plane is doing what it is doing here? Let us have all of those thoughts and feelings down in the comments and then discuss. If we have more to share for Control, we will obviously share it all here. Be sure to keep checking back here for all of that and much more.