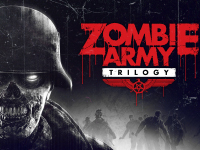 If you missed out on the last time the Zombie Army Trilogy was placed out there, you will have another chance to give it a go on the Switch this time around. It has been a while since the game hit the PS4, Xbox One, and PC but Rebellion is offering up to another run of gamers out there. You know, those who may have given Zombie Army 4 a go but did not have a solid point of reference before then. It happens every now and then. It is just now that those gamers will have a chance to give it a go on March 31st now. Only a short little wait to get your zombie killing on even more.

Yes, we have a release date for the Switch version of Zombie Army Trilogy and just what will be coming with it. The short answer being that it will house everything that we had in the last bundle of these sorts but working on the Switch. Do not let that dissuade you, though, as it is still a solid trilogy of titles. Then you can have the full run of the Zombie Army games in one little spot that you can take on the go. Something that I am certain many gamers out there have been waiting for. That or they did not know they were waiting for it as of yet. Now you can have a look and dive back into killing Zombie Hitler.

Independent UK studio Rebellion is delighted to announce the cult Sniper Elite spinoff will be available both digitally and at retail on March 31, 2020.

Travel to 1945 and slay on-the-go as you face off against the massive hordes that comprise Hitler’s Nazi zombie army. Use sniper rifles, machine guns and shotguns to rip through the waves of undead, and take on the demon dictator himself in an incredible final battle!

Zombie Army Trilogy comes with everything previously released on consoles. Survive 3 intense story campaigns and take on Horde Mode, all available either in singleplayer or in drop-in, drop-out co-op for up to 4 players.

Are you ready for more of the Zombie Army games out there or are you still digging into the most recent one? Are you surprised that this is coming out almost two months after the latest title? Do you even care about all of that and are just looking to have all of the zombie killing games in one mobile spot now? Let us and the world out there know down in the comments. If there is more to share for the Zombie Army Trilogy or the franchise in general, we will share it all here. All you have to do is keep checking back in for all of that and much more.