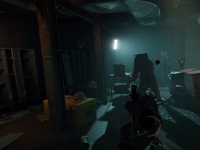 Gameplay for Half-Life: Alyx is here giving us all the fun of Half-Life and just how we will move around in VR

We are finally in the month of release for Half-Life: Alyx and now we are glad to be back with some actual gameplay from the game to look and enjoy. Something that actually shows off just how Valve has made this game function and how some of the controls will be used. Sure, it is a VR title so we will be part of the controls here, but something that is usually a sticking point for these kinds of games is the movement in the world. Something that this Half-Life title is tackling by giving us all of the options. Not only that, but that is what the gameplay we are about to look at will walk us all through.

One of the more traditional ways to move about environments in the VR scapes has to be the teleport method and Half-Life: Alyx will be using that as the prime option as it would look. This will let us hop around the maps to get from the points in the game and lock our footing into place until we jump again. Not always the best option, but it does keep the VR sickness down from allowing more of the free movement other titles can have. Although, it is worth noting that Alyx is sporting that and one more option to play with.

Yes, we will have the option to move around with the freedom of walking in Half-Life: Alyx, as you will see in the second video we have here. It does let us glide around but is usually more of something that will cause people to get motion sickness. Even if it can be the more realistic version of it all. More so than teleportation and the final one we have for Half-Life: Alyx that is called Shift. The controls are more like the teleportation option but will just have the avatar "walk" to the location instead of just hopping to. It seems like it would be more of a nightmare to me, but we all like our options and that is what we are getting here.

Set between the events of Half-Life and Half-Life 2, Half-Life: Alyx is a new full-length game built from the ground up by Valve for virtual reality.

How are you feeling about your movement options in Half-Life: Alyx? Do you think that it will work out well to give everyone so many options or will most stick to one and never give any a try along the journey? How do you feel about the world and other aspects hidden into this gameplay as well? Let us all know down in the comments and then feel free to discuss it all. For more on Half-Life: Alyx, all you have to do is keep checking in here. We will keep all of the news and information flowing to you as best as we can.