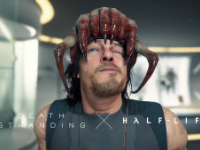 We all knew it was coming and now we have a solid release date for when Death Stranding will be making its PC debut on Steam and the Epic Store. Even though it was thought that it was going to be a PS4 only title given the partnership Kojima Productions entered, 505 Games has been staunch on bringing the game over. Now for those who held out, you will be seeing Death Stranding hit your PCs on June 2nd. That way you can see what all the hype or sadness was all about for Kojima's latest outing. I had a blast with it, but it is not going to be a title for everyone indeed.

To go one step further, those who are looking to dive into Death Stranding on the PC there will be a bit more content to enjoy. All of which will be in terms of cosmetics and extra updates that a good gaming PC will be able to do. High frame rates and ultra-wide monitor support will be in here for Death Stranding if you have a system that will do so. No matter the case, there will be some content from Valve and Half-Life mixed in too. There is no word on if that will make the leap over to the Epic Store as well, but as you can see in the trailer and images there will be some extra fun.

505 Games and Kojima Productions are thrilled to announce that Death Stranding will launch simultaneously on the Epic Games Store and Steam on June 2, 2020.

What’s more, the PC edition of Death Stranding will also feature the following:

Purchase Death Stranding on launch day to get the following:

Pre-purchase Death Stranding to receive the above and a bunch of additional items. Have you been holding out for Death Stranding to hit the PC or did you give it a go on the PS4 already? Do you think that it will look better on the PC than we have seen before or will it still be close enough outside of the high frame rate possibilities? Do you think that the crossover will go to all forms of the game or will it only be on the Steam side of it all? Let us all know down in the comments and then feel free to discuss it all. If there is more to share for Death Stranding, we will add it to the site for us all to enjoy. Just be sure to keep a lookout for all of that and more.