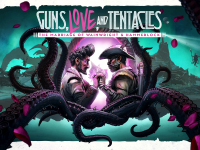 Get ready to have some wedded fun in Borderlands 3, as we have the next big DLC announced with a date here. This next one being helmed as Guns, Love, And Tentacles, so we can only imagine what Gearbox will have ready for us. Well, that is outside of the marriage of Wainwright Jakobs and Sir Alistair Hammerlock in the story of it all. Yes, we are getting that marriage story so many of us have been waiting for in a Borderlands title. Now we only have to wait until March 26th to be able to experience this on the PS4, Xbox One, and PC. That is not too far off at this point for paying for this DLC early.

In this new story for Borderlands 3, we will be heading off to the planet of Xylourgos to survive the freezing temperatures and monsters that are abound. That and all of the cultists and Vault Monster that are in the area. What a horrible place to plan a wedding. I guess it is good that Gaige is returning to it all to help us out. All while collecting more loot, weapons, and other customization gear for your Borderlands 3 hunters. All the other great stuff that has come with these DLCs to date and such. It would have been off-brand if we did not get that with the same fun storytelling we are used to. Have a look at a bit of what will be coming soon.

On March 26, you can dive into Borderlands 3's second campaign add-on for a surprisingly dangerous engagement party in Guns, Love, And Tentacles: The Marriage Of Wainwright & Hammerlock. Sir Alistair Hammerlock and Wainwright Jakobs are finally tying the knot, and they want you to come to celebrate their upcoming nuptials on the ice planet of Xylourgos. Its frozen wastes have thinned out all but the most vicious wildlife, and the eerie town of Cursehaven – where you've all agreed to meet – is located beneath the colossal carcass of a fallen Vault Monster.

As if this ice world's biting cold and vicious wildlife weren’t unwelcoming enough, a band of creepy occultists who worship the Vault Monster's carcass are hellbent on breaking up the betrothed partners. You'll have to fight back the forces of otherworldly evil if Wainwright and Hammerlock are to have their happily ever after. Luckily, the most badass wedding planner in the galaxy has your back: Gaige, a fugitive Vault Hunter (and returning fan-favorite character) who's inseparable from her robot BFF Deathtrap. And that’s not all:

Are you excited to see how all of this goes down in Borderlands 3 or were you looking for something as we had before? Do you think there will be some good reason as to keep holding the wedding in the harsh location or will it be just because the characters want to? How are you feeling about Gaige coming back in here for the DLC or would you have rather seen another character from the past get brought back in? Let us all know down in the comments and then feel free to discuss it all. For more on Borderlands 3, be sure to keep checking in here. We will keep it all coming at you as it all flows out there.