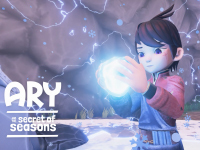 It is getting closer to a season change here in the world, so it is about time we had one more good look at Ary And The Secret Of Seasons. This fun little title that was given a small showing a little while back and with its Summer 2020 release window closing in, it is about time that we had a full explanation of what is going on in this title from eXiin. I will try to stop with all of the seasonal puns here to get right into the meat of it all instead. Given that this is just what we have been offered here for Ary, it will make more sense. That or you can just skip right along down the road and ignore some of the words that are going to follow.

If you missed out on the announcement for Ary And The Secret Of Seasons when it first came, this is a new platforming and action-adventure title that Modus Games is helping bring to market. It looks like a fairly standard run at the genre with the fun twist that the main character can summon orbs of seasonal energy into the world to help with all of that. The details are a bit murky on the very specifics, but as you can see, Ary can use the Winter to freeze locations or bring in ice platforms to jump to. She can also use some of the Spring to cause vines to grow in an area to make bridges. You can see where all of this is going, I hope. It is a nice little twist to a very straightforward genre of games, and I for one am interested to see how much further it goes. Especially when you mix in the need to use all of this in the combat of the game and not just the traversal.

Ary And The Secret Of Seasons — PAX Gameplay Overview

Indie publisher Modus Games and developer eXiin today announced Ary And The Secret Of Seasons, the upcoming action-adventure following a young girl’s courageous journey to mend her world’s disrupted seasons, will release this summer on PlayStation 4, Nintendo Switch, Xbox One, and Steam.

In Ary And The Secret Of Seasons, Ary accepts a calling her father is unable to answer, embarking in his place to resolve a sudden disparity between the once perfectly balanced seasons within the land of Valdi. Creating chasm-clearing platforms and aiding Valdi’s exasperated citizens is just the beginning for the potential carried in Ary’s power, which supports a sense of limitless discovery throughout the heroine’s engrossing story.

Did you remember all of the fun Ary looked back when it was first announced or are you glad to have this great reminder? Do you think that the seasons will have more to them than the basics we know now or will it stay like this until launch? Do you find it interesting that they decided to work with the game mechanics first and then build the story around it all? Let us all know down in the comments and then feel free to discuss it all at length. If we find more to share for Ary And The Secret Of Seasons, we will share it all here. All you need to do is stick close to the site to make sure not to miss a single thing.