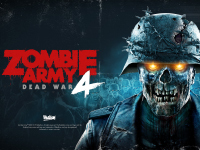 We sit down and review Zombie Army 4: Dead War. The Nazi Zombies are back and we need to blow their balls off. Here is our review of Zombie Army 4

It is that time of year again when Nazi zombie killing is all the rage and here we go with Zombie Army 4: Dead War to pave the way for more of it. If the title did not give it all away, it is the fourth big installment to the franchise from Rebellion and takes us into some new territory and fun. Also with a few fun scares mixed in and all of the zombie-slaying one could want. I would at least think so with the title that we have here on the game and how the Zombie Army franchise has gone so far. I do guess that we do not need to wonder much more as the game has hit the PS4, Xbox One, and PC. We also had a chance to dive in and see how it all went. Here is our review of it all.

You would think that banishing Hitler to Hell in the previous Zombie Army would have stuck, but it does not look like that is the case. The hordes are back and in force with all manner of other occulty things going on. The resistance has to gear up yet again to slay the hordes of undead that are plaguing the lands and bring an end to it all for once. Yet again…or until we have a Zombie Army 5. Does the story truly need to make sense when we are out to kill undead Nazis? Right out the gate here, I am going to have to dig into the controls of Zombie Army 4: Dead War. Given that we are in a third-person camera mode and not a first-person for the game here, it is something that needs to be taken care of. By default, they are rough and clunky even for someone that primarily plays third-person games. The right stick is used to turn the character and not to look around and when you are getting swarmed from the undead and need to take quick aim, this brought on too many close calls. They were almost as rough as the first Resident Evil when it came to moving and shooting. The plus side to it all is that they are configurable with other preset that can get closer to a normal third-person with shooter elements style of gameplay. It is an odd choice that Zombie Army 4 would force such rough controls from the beginning, but it does and forced me to have to replay the first few hours after making the changes later in the game.

Another odd thing about Zombie Army 4 that hits this area has to be the HUD of it all. Again, when you need to make snap choices and take quick aim, one needs to be able to have access to all of the data they need quickly and easy to read. This was not the case that I found in the game as I was constantly wondering why I could not pick up items and thought the game was glitching only to read a small bit of text in a dark red stating why I could not. This extended out to larger item boxes in Zombie Army 4 too. Usually, these were placed in locations where you could take the time to read but in the mix of a boss fight or horde rush, I found myself running to the wrong ammo boxes and not knowing it until multiple attempts to line up the camera so I could resupply. In repeat plays of the level, it was easy to remember what and where they were without the need of the HUD, but on a first play it was confusing very fast and brought me close to tossing a controller aside.

The final big gripe I found myself having in Zombie Army 4: Dead War had to be down to the upgrade system and how it seemed to work. More along the lines that most of the upgrades I selected for my weapons and characters never felt like they had a significant change or update. That or they fired off at the worst and most random times. Sure, some of them were listed to go off at random, but for instance, there was one of the early upgrades that turned one of my rounds into an explosive shot. It only ever seemed to go off when missing a target and never when hitting one. Sure, this could be chalked up to player skill, but it felt too consistent to say it was fully on my side. All of which is something that could be fixed via patch and updates to Zombie Army 4, but for now it goes here as it detracted from my fun during my playtime. Now that the harshness is out of the way, I have to give some great praising for the level design and structure we had in Zombie Army 4 here. In a traditional shooter, they may have felt like a bit of a hallway and straightforward experience. In this game and with the randomness of when the zombies would spawn in, it all led to all the right levels of terror and action mixed together. Something that seems to be missing in most games along the same vein of this one. Rebellion even used some of the snaking designs to bring us back toward areas we had clear to see things from a different vantage. I was constantly catching myself in a level of awe on how they used the space and made the world and areas feel like they were not something crafted just for a video game. All of which also had some great choke points, sniper nests, and the rest to aid in the game progression and make us feel a bit smarter for finding them. If that makes sense to you at all.

Also, in a game called Zombie Army it would sound like it would feel like all we would get is a slew of zombies with only a few differences for us to shoot. More so when you mix in the Nazi part of it all. We, thankfully, were able to get more than just a few different zombie types with different styles of armor on them to make them harder to take down. In fact, there are so many creative and different forms of zed in here that it never feels like the game has relied on the gimmick of it all to keep us engaged. Even the zombies that feel like the normal tropes in games like Zombie Army 4: Dead War, feel different or look insane enough to make us ignore that. I am looking at you flamethrower and sniper zombies. Almost all of them felt truly inspired and were fun just to snipe and watch before blowing their brains all over the zed standing next to them.

Finally, and this is going to split some of you, the shooting in Zombie Army 4 feels like it has been vastly improved upon over the other titles that Rebellion has put out there. More in the aspect of making them feel more realistic and challenging players to do more than point and click. Even in lower difficulties where gravity was not turned on for bullet drop and the like, it always felt like care was there to keep this realism in a title based on an outlandish concept. Shotguns never turned zombies into exploding blood piñatas and the sidearm was there to be used in a last-ditch effort more than ever. All of which made the instances when you can trigger the X-ray shots all that more satisfying, as it was something you had to work for. Again, it is not going to be something that many players will want in Zombie Army 4 but if you give it a shot it will pay off. Okay, so it is time again to admit that Zombie Army 4: Dead War is not going to be a game for everyone out there. It felt like it could have been a first-person shooter instead and the third-person action is going to throw many off. While the controls are a bit clunky, they can be fixed through the settings but as a default, they will drive you mad. Just like the realistic shooting that the game employs. All of which makes beating Zombie Army 4 or even a few waves of the horde all that much more satisfying. I will not deny that even with the frustrations I had a blast with the game. At the end of the day, that is all we really should want out of a game like this. Do you really want more from shooting Nazi Zombies in a horror-filled land of the dead? Well, maybe, but this one gives you so much that you can easily lose hours and never even realize it.

I give Zombie Army 4: Dead War 666 Nut Shots on the Nut Shot scale.

Zombie Army 4: Dead War was developed and published by Rebellion for the PS4, Xbox One, and Switch on February 4th, 2020. A PS4 copy of the game was provided by the publisher for reviewing purposes.