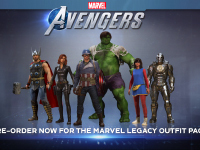 It may have been delayed, but that does not mean we are not going to be able to pre-order Marvel’s Avengers as of now. Something we could have done for a while now, sure, but now we have the official prices and all of the editions that Crystal Dynamics is going to be placing the game in. This might now be something you have been eagerly waiting for. I know I have been and now we can see how much that big edition of Marvel’s Avengers will run us. Not to mention all of the little extras that will be coming with it and the pre-order bonuses we knew were coming. Let us just hope it sticks to its September 4th release date on the PS4, Xbox One, and PC.

There is the usual Deluxe Edition coming for Marvel’s Avengers that will house the game, an exclusive Obsidian Outfit pack, Obsidian nameplates, and the 72-hour early access to the game. If that is not enough, there is the Earth’s Mightiest Edition of the game that has all of that and the Captain America Statue, SteelBook case, Hulk Bobblehead, Mjolnir Keychain, Black Widow’s Belt Buckle, Iron Man’s Prototype Amor Blueprints, Kamala Khan’s Honorary Avenger Pin, and a commemorative Avengers group photo. All for the low price of $199.99 USD. All of the gear that we have been waiting for since we saw it last year. I will take it all now.

On top of all of that, pre-ordering Marvel’s Avengers will also score you a legacy outfit pack that will give you skins for all of the characters in their original forms. There are also a few extra emotes and nameplates if you do all of this digitally through the PS Store but you do miss out on getting all of the other extras as it is digital-only. It is not like they will not be unlocked later on and most likely for free. You just will not have it from the jump when Marvel’s Avengers launches.

Square Enix announced today that Marvel’s Avengers: Earth’s Mightiest Edition and Deluxe Edition will be available alongside the Standard Edition on September 4, 2020. Further, players who pre-order any version of the game will receive guaranteed access to the Beta (at participating retailers), a Marvel Legacy Outfit pack, and an exclusive nameplate. At participating retailers, those who pre-order Marvel’s Avengers will receive either a limited-edition pin set, patch set, digital comic book, or SteelBook designed by legendary Marvel artist Mark Brooks. The company also kicked-off its pre-order program today, which includes guaranteed access to the Beta, an exclusive nameplate, and a Marvel Legacy Outfit pack. These Marvel Legacy Outfits are inspired by moments from the comics that defined who each Super Hero was as they first embraced their powers to become the icons they are today. In addition, players who pre-order their copy of Marvel’s Avengers from the PlayStation Store will receive additional pre-order bonuses, including a Ms. Marvel “Talk to the Hand” emote and “Marvel’s Avengers: Hex Pattern Logo” dynamic theme. The exclusive Digital Edition on the PlayStation Store includes an exclusive Ms. Marvel nameplate and 1,000 credits which can be used towards Super Hero customizations. This edition also includes 72-hour early access when the game launches in September. PlayStation 4 players can also play the beta first when they pre-order any edition on PS4.

Are you ready to pre-order Marvel’s Avengers or will you be holding off for a bit? Did you expect it to go for the price that we are seeing here or did you expect something higher? Is it weird to have digital-only pre-orders here again or does it make sense for those not looking to get all the cool extras? Let us all know down in the comments and then feel free to discuss it all. For more on Marvel’s Avengers, be sure to keep checking back here. We will keep all of it coming out to you as best and as fast as we can.