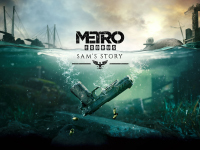 We are done waiting and we can now dive into the horrors that lay in wait in the new DLC for Metro Exodus that has dropped on the PS4, Xbox One, and PC. This would be the one where we get to see were 4A Games is taking Sam after the events of the core game. You know, the American soldier that was helping us out and then wanted to get home after learning what we all learned in Metro Exodus. You should know what that is if you are reading this. If not, then welcome to all of the spoiler territory for the game now. This is the second major expansion so you have no recourse to go with on getting spoiled now.

Sure, we had all of this news before, but what we did not have was any of the gameplay that is getting added into Metro Exodus with this DLC, and now we do. It looks like it is taking things back into darker territory than I remember in the core game, which is something I am perfectly fine with. Not to say that Metro Exodus was not dark and filled with horrors, it just looks like they are all pouring out now with the new DLC. You can see a bit more of what I am talking about below or just download the new DLC and play it through completely blind. It is up to you but it all looks like it will be a good time.

The second major expansion for Metro Exodus, Sam’s Story, follows former US Marine turned Spartan Ranger Sam on his quest to return home. After the events of Metro Exodus, Sam’s long-held dream of returning to his homeland doesn't seem so far-fetched anymore.

Traverse the remains of Vladivostok’s tsunami-ravaged harbors, ruined industrial buildings, and crumbling residential districts in a huge, ‘sandbox survival’ level. To complete his journey, Sam will discover that he needs every tactic he has learned so far to survive, as his surroundings prove to be far trickier than expected. The journey ends here.

Sam’s Story is available to buy now on Xbox One, PlayStation 4, PC, and Stadia and is included in the Metro Exodus Expansion Pass.

Is this the Metro Exodus DLC that you have been waiting for or were you looking for something else? Do you agree that this looks like a darker story than we had before or is it on par with what we had? Do you think that we will get back home in this story or will Sam be stuck where he is forever? Let us know down in the comments and then feel free to discuss it all. If there is more for Metro Exodus, we will add it all here. All you need to do is keep checking back in for that and much more.