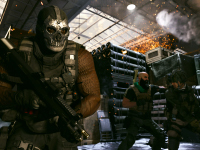 The second season of Call Of Duty: Modern Warfare is almost here and we have a new look at just what will be added into Call Of Duty with this next update

The war is going to wage on just a bit more in Call Of Duty: Modern Warfare, as the next DLC drop is hitting us on February 11th and bringing with it more to shoot. Be that enemies or maps in the game, Infinity Ward has more for us and those that are looking to keep this one going for just a bit longer. We do need something to keep us shooting in our games until the next big Call Of Duty title is revealed and then launched. It might as well before the one we are currently playing on the PS4, Xbox One, and PC. If not, what would we be shooting? Am I right?

Just as the others before, this DLC adds some new maps, weapons, modes, gunfights, and Ground War combat into Call Of Duty here. Some of which are older versions brought back to the forefront for us all and others just to expand the new world of the game. Most of us will most likely just see new maps we will be able to kill each other on and new tools to do so. That could just be me and my love of the campaigns over the multiplayer in Call Of Duty. If only we could get more of that, but that is not where the money is on these games. Nonetheless, have a look at what we will have here as of tomorrow.

Season Two of Modern Warfare returns Ghost to the firefight and brings more Multiplayer experiences through maps, modes, and an all-new Battle Pass. Plus earn rewards to climb through the Season Two Ranks with more ribbons to earn, new challenges to complete, and new missions for both Multiplayer and Special Ops.

In Season Two, Al-Qatala agents have stolen a Soviet nuclear warhead and smuggled it into the city of Verdansk. Combined with previously obtained chemical gas, Al-Qatala is determined to cut off Verdansk from the rest of the world. On the brink of a global catastrophe, Captain Price sends in Ghost to track down the location of the warhead and lead key Operators before it’s too late.

The War Rages On.

The fight continues in Season Two of Call Of Duty: Modern Warfare, free on all platforms on February 11.

Are you fully ready for the new extras coming to Call Of Duty: Modern Warfare here? Would you like to see more of the core story of the game or do you enjoy these little bits getting added on for the multiplayer and other modes of the game? Do you just want to be able to shoot your friends in the game and nothing more? Let us have all of those thoughts and feelings down in the comments and then feel free to discuss it all. If there is more for Call Of Duty: Modern Warfare, we will obviously have it all here for you. Be sure to keep checking in for all of that and much more as we head forward in time.