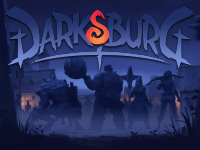 It is shaping up to be a zombie survival month in February, as we have another title in the mix with Darksburg hitting Early Access over on the PC via Steam. In fact, it is hitting the Early Access on the 12th here for those interested to give this co-op survival-action title a go. Well, at least, part of it as it looks like there will be the usual partial version of the game we are going to have as it is an Early Access. This will give Shiro Games a chance to build and expand Darksburg if things go well and we all crave more. We should all know this process well by now. If not, then you are let in on the fun of it all and can get ready for it soon.

In Darksburg, we will get to play co-op with up to three extra friends as we select one of the four Survivors or four Revenants in the game. We can also go all solo with AI bots running the others if you want to be antisocial too. All of which is to just slay hordes of zombies in the medieval setting that we are getting here with the stylized art direction of Darksburg. You can get a look and feel for what the game will house just below, as well as a bit of the gameplay we can expect. This could be the sleeper hit many of us might not have heard about before now, so take a look and make sure.

Select from a squad of eclectic Survivors and fight to purify a medieval town overrun by hordes of shambling reanimated corpses. Team with up to three other players or battle alongside AI allies through Darksburg’s streets, completing objective-based challenges in white-knuckled co-op matches. Face off against fearsome Revenants, super-powered zombies controlled by other players, in brutal PvP matches or face down endless waves Last Stand mode.

What thoughts do you have for Darksburg based on all of this and do you think you will be in on the Early Access of the game? Do you suspect that we will see more characters as the development continues or will this be the limits we will see in the final game? How far out do you think we are from the final version of the game or can we expect this to be in Early Access for an undetermined amount of time? Let us all know down in the comments and then feel free to discuss it below. If we have more to share for Darksburg, we will share it all here. Be sure to keep checking in on the site for all of that and more.