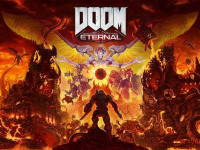 The wait is becoming excruciating as we still have over a month for DOOM Eternal to finally hit the PS4, Xbox One, Switch, and various PC platforms. March 20th seems like it is still so far off and that there is so much waiting we have been doing for id Software's next addition to the franchise. All of which we should have known by now and I am only repeating words to pad things out. Not because I am one of those demons from DOOM, but because I need a way to lead into the fact that we now have the first ten minutes of the game out there. Well, the part of it all that Bethesda wants us to see to keep the hype train rolling on.

I can guess that you might have jumped down to see the new video for DOOM Eternal as of now, but for those still reading, this video obviously holds spoilers. It takes us from title card on into a few of the mini-missions we have to take on in DOOM Eternal before cutting out at the usual predictable spots. We do get to see just how the tutorials of the game will play out with mini-scenes played in the head to explain how to use things like the chainsaw. Not that fans would need that kind of thing, but it is how we will go through the game to make sure we can fully kill off all of the evil taking over our world. That or you can just enjoy the bloody ten-minutes of gameplay and all it has to offer with only a few bits of story spoilers and collectible finding.

See Hell come to Earth in the first 10 minutes of DOOM Eternal in glorious 4K/60fps on PC. Let the ripping and tearing begin, until it is done.

DOOM Eternal will be released on March 20 for PC, PS4, Xbox One, and Google Stadia, with a Nintendo Switch version following later.

Where are you at on the DOOM Eternal hype train as of now? Do videos like this get you all pumped up to play the game or does it give too much away for the start of it all that you would rather not see? Do you like this form of the tutorial in video games so there is a reason for them or would you prefer a different method to get the information out there? Let us all know down in the comments and then feel free to discuss it all at length. When we have anything else to share for DOOM Eternal, we will obviously have it here. Just keep clicking back in to see and hear all of it in due time.