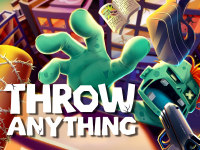 VR title, Throw Anything, is making its way onto the PSVR this February allowing even more players to take on the horde and Throw Anything

It may have taken a bit of time, but it looks like Throw Anything will be making its move over to the PSVR to expand out the player base just a bit more. It was mainly relegated to the PC VR platforms with a few small branches out, but I am guessing that VisualLight finally got everything running on the only missing platform and now other players can join in. They can also join in soon, as Throw Anything will be gracing the PSVR on February 6th. Not too far off indeed and with a whole lot to offer for those that had to wait the time.

For those who have no clue what Throw Anything is, it is a game where you are in a high-rise building and have zombies and other various undead scaling to get you. That is where the title comes in, as you are armed with all kinds of things that can be found in your place so you can literally throw anything to knock them all off. There are a few other little bits in there to aid with things, but that is the basic premise and it does lead to a whole lot of whacky fun. Have a look at just how it will look on the PSVR when it does drop with all of the current updates and add-ons the PC gamers have had.

If you’ve been waiting for a PSVR port of Throw Anything, you’re in luck: The game will be hitting the store on Thursday, February 6!

The PSVR release is getting ALL of the content updates and fixes from the Steam VR version (which reaped the benefits of a popular Early Access release) – including a more intuitive reward system, rebalanced difficulty, a new item shop and level (Stage 6), and improved graphics.

Did you ever suspect that Throw Anything was going to make the leap over to the PSVR or was it only the matter of time we all waited? Will you be diving into this fun little experience or leave it be for something else? Do you think that things should have been further updated in the two years it has been out there? Let us have those thoughts and feelings down in the comments and then discuss. If we have anything further for Throw Anything, we will update you all here on the site. Be sure to keep checking in for all of that and much more.