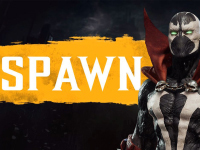 Just before Spawn is to be shown off in Mortal Kombat 11, we have a slight look for the toy version of the character and how he will look in the Mortal Kombat universe

There is still a whole lot of time before we are going to get the Spawn DLC in Mortal Kombat 11, but that does not mean we will not be able to see him before March. Not in any other form, but specifically the version of the character that might be NetherRealm Studios' take specifically for the fighting game. There is already a timeline for the first trailer we will see him in but I like to get the full view of the character instead of just from the torso up as the splash images for Mortal Kombat 11 have already shown. Thankfully, it looks like a toy magazine of all places may have given us a look at just how the character will look and possibly fight. Time to put on those speculation caps…

As you will be able to see below, you can see the full toy version of Spawn as described for the Mortal Kombat franchise. This is not the final version as the text states but a nice bit of concept for the final version of the toy. Something that holds a lot of similarities to the splash images we have had for Spawn so far. Also interesting to note, the toy is coming with a sword so we might get to see him using that weapon in the mix of things in Mortal Kombat 11 instead of the Battle Axe and/or other various things he has used to dispatch enemies in the comics. Things can always change and deviate, but it is a nice look at what could be here in March. I know I am excited in general, as long as they even get part of the character correct in the game. Do you think that this will be the final version of Spawn we will have in Mortal Kombat 11 or is this just for the toy line? Could we see him using only a sword in the game or will it just be part of the arsenal besides the chains and cape? What do you think his fatalities will look like and will he use other characters from the comics to aid him? Let us all know those thoughts and feelings down in the comments and then feel free to discuss. When we have more to share for Mortal Kombat 11 or the franchise in general, we will share it all here. Be sure to keep checking in for all of that and more.