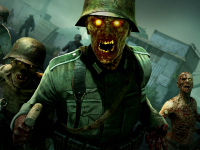 The season one content for Zombie Army 4: Dead War's post-launch is detailed out and will be coming for us all to expand out Zombie Army just a bit more

Most of us out there figured that the core release of Zombie Army 4: Dead War was not going to be where the content ended and fully expected there to be some post-launch content to be enjoyed. Here we are a few days before the February 4th release of the game and Rebellion is gracing us with a look at what is to come with the game sometime after we bite into the meat of it all. It does seem a bit odd to drop all of this on us just before launch, as it seems like stuff that should be included in the core game but I guess it is what it is here. At the very least, it does mean that we will have more to Zombie Army 4 than what we will start with on the PS4, Xbox One, and PC.

The following trailer teases more to it all, but we will be getting three new campaign missions in Zombie Army 4, a bunch of new character packs and outfits, and a whole lot of new weapons and skins. Just about what you would expect for a game like this. There will also be a new Horde Mode that will be coming, but that will be a free update to Zombie Army 4 instead of the paid DLC. Well, you could also land all of that if you buy one of the higher tiered bundles for the game too. I will still stick with my odd comment and it all seems like stuff that could have been in the core game from the jump.

The looming release of Zombie Army 4: Dead War draws ever closer, but there’s a whole new realm of terror lurking just behind!

Season Pass 1 will grant access to the entirety of Season 1:

New maps for Zombie Army 4: Dead War’s Horde Mode. These will be FREE for everyone brave enough to take them on!

What are your thoughts on this new content for Zombie Army 4 before it even launches? Does it matter to you as you have already picked up the Deluxe Editions and will be getting it anyway? Do you think that there should have been something different added in here instead? Give us all of that feedback down in the comments. If there is more to share for Zombie Army 4: Dead War pre or post launch, we will have it all here. All you need to do is keep coming back to see and hear all of it.